Sometimes people hurt themselves. Self mutilation. Cutting. Scarification. Pulling out eyelashes or hair. Hitting. Biting. Pinching. Starvation. Drug and alcohol abuse. Fighting. Overeating. So many ways people inflict pain on their bodies. But why? Does it mean they are suicidal? Not always, but depression is common in people who self-injure. Does it mean they like it? Not necessarily. But it can serve a purpose. And if they don’t figure out what benefit they are receiving from the pain, they may escalate and cause permanent damage. 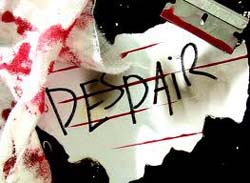 The reasons why people inflict harm on themselves vary as much as the people themselves. Sometimes people do it to numb painful or negative feelings. Sometimes it is a release. They say hurting themselves allows the pain within to be replaced by pain on the outside. Others do it to punish themselves. Feelings of shame or guilt or dread even if unjustified, can cause someone to think they deserve to be hurt. I also believe that self-harm can cause an adrenaline release that can be both relieving and self-medicating, and addicting. The intensity of the pain causes adrenaline to be released and the chemical change in the body can shift the mood. Just as the brain learns a drug or alcohol, food or sex can biologically shift body chemistry and subsequently mood, so can adrenaline. Even children may learn this inadvertently. Pulling out hair or eyelashes (Trichotrillomania) may help them relax or self-calm but soon they have no hair left and didn’t even realize they were doing it.

Solutions and Alternatives to Self-Harm

Telling someone to just stop hurting themselves is not enough. It is important to figure out what benefit the brain or body or psyche is getting from the pain. This may take some detective work to figure out because we don’t often consciously say, hmm I’m going to do this self-destructive behavior and in ten minutes I’ll feel better. It may help to track moods and triggers that precede the self-harm. And the feeling that comes after. Once a pattern or clues are found, work to find an alternative behavior that will have a similar psychological result, without the self-destruction. For example if the trigger is obsessing about a negative subject, maybe writing it down will get it out of the spiral in your brain. Or if it is self-punishment, work with a counselor on how to forgive. If the pain is self-medication, talking to a doctor about nonaddicting effective medication may be a solution.

There are many possible alternatives and solutions that can be discovered once you learn how your brain thinks the self-harm is benefitting you. Working with a support group or a therapist, a doctor or a minister to find the patterns and the clues are the first steps to better self-care and less self-harm. Be patient with yourself and allow others to help you. Depression hurts, but together we can soften the edges.

APA Reference
Merz, A. (2012, May 31). Depression Hurts: Self-Injury and Depression, HealthyPlace. Retrieved on 2022, December 5 from https://www.healthyplace.com/blogs/copingwithdepression/2012/05/depression-hurts

What’s Not True About Depression Can Hurt You
How to Help a Depressed Friend: A Poem of Support to Share
geri
June, 9 2018 at 8:34 am

Ever since i can remember, about 5 years old perhaps. whenever i get upset, i would resort to one way or another as long as it brings me relief from the "heartache" at that moment. i still remember i used to pinch myself all over, take some heavy item and smashed it on my hands or legs, knocking my head repeatedly on the marble floor or punching my knuckle on the thickest tree branch i can find till it bleeds. As i grow up and gain access with more options, i began turning to scissors, cutter... i became very reliant on this method to relieve myself that i brought a cutter or 2 in my bag everywhere i go, just in case i feel down or some unexpected situation happens. if i feel down again before my wounds healed, i will then pinch on my recovering wounds and cut right on top where the previous wounds are. sometimes, i will take a pinch of salt and spread it over my wounds..... i was dragged to a clinic when my friend spotted it, the doc insisted that i should stitch up in case of infection but i refused to do it.Actually i am afraid to see others in blood, not human exclusively! i always felt as though the wounds is on me and feel the pain. But oddly, when the cut is on my own i felt enjoyment like a rush of adrenaline that diverts my attention away from my problems.
One fine day, i finally thought to myself, that whatever i have been doing is so abnormal.. plus, its getting more and more difficult to cover-up without others noticing it. I decided to let go of this unhealthy way of releasing my stress by throwing all the cutters and scissors i can see in my sight(and because my mom saw it and it broke her heart). I started reading self-help articles, i went to see doctor hoping to get some help but instead he gave me a referral to mental institution to see a psychiatrist. Despite his repeated reminders to please turn up for the appointment, i did not turn up after all...
The fact that I've been reading up gave me some knowledge. i knew most would get a referral to a social counselor, or otherwise a psychology. Not directly to the psychiatrist.... that gave me chills and i guess i wasn't ready to face whatever diagnosis i might be given so... i believe i can overcome it myself although it might be slightly more difficult without help!
Its been 15 years since the last time i cut myself. i am in my thirties now, i did it... if i can overcome it, anyone can do the same! When you are in anger or feeling depressed, think of those people that love you and think of how sad they will be to see you in this state. You can try to imagine yourself dying in imagination and then start all over again fresh in real.

I don't know why or how but my form of self harm comes from my body. If someone or something hit my landmine, my body start hurting from inside. My body feels like being torn apart, I start vomiting from the pain. It can varies from 30 second to 10 minutes. I don't know what to do, how to stop it, what kind of help should I seek. I found out listening to a music can ease the pain a bit.

Hello, Fai, I am Jennifer, a current author of the Coping With Depression Blog. I am so sorry that you are experiencing this extreme pain with vomiting. You need to see a doctor for a full workup. Please do this immediately. We care about you and want you to get better.

I have a more mild form of bipolar, The last time I cut was about 8 months ago. I thought I was doing well but now I am having horrible thoughts about starting again. This trial has been extremely difficult on me I have attempted suicide at least three times. I've been to the Er once and a Behavioral Health center once as well. It all just seems to continue to get worse and I don't know what to do.

Hello, Misty. I am one of the current authors of the Coping With Depression Blog. I am sorry that you are struggling with thoughts about harming yourself. I am also sorry to hear that you are in so much pain and have attempted suicide three times. I'm glad that you've gotten help; please continue to do so. Talk with your health care provider. Let him/ her know that things are getting worse and that you're struggling with thoughts of self harm. There is hope, and there are better days ahead. Reach out to your support system and keep on fighting. Thank you for reaching out here.

i know that sometimes its hard to control it like today i almost cute my wrist but you have to learn self control. which is the main thing when you are depress i for one still have a long way to go but we all i know can make it throw.

I haven't cut yet, but i have been considering it for some time now. One alternative i use is drawing on myself, it sounds weird i know, but when i feel like cutting id rather see art to show myself that there is beauty in me even if i don't see it yet.

Hi Sam,
Drawing on yourself is an excellent alternative, and one that is highly recommended in the mental health community. Some people also run ice cubes over their skin or paint on themselves. Keep up the healthy alternative to self-harm; You sound strong!
Tiffanie

Hi Sanjay,
The best thing you can do is work to find ways to feel release and to feel calm that do not involve hurting yourself. There are a lot of suggestions online, like here: http://www.healthyplace.com/abuse/self-injury/alternatives-to-self-harm-self-injury/. I encourage you to also reach out for professional help. It sounds like the pressure and stress you feel is intense and in need of some guidance. I know first-hand the calm that follows self-destruction, and I also know that I feel that same way after I run barefoot or throw eggs at a hard surface. Alternatives exist. You just need to find what works for you.
Tiffanie
Author, Coping with Depression Blog

Recovery from self-injury is tough. I've had a few months without any slips, and if you don't count the slips I've had over a year of recovery. One trick I use to keep from self-harming is to picture whatever body part you self-harm on as someone you love's. Would I harm someone I love? That worked to stop me. Not saying it'll work for everyone, I just thought I'd share what helped me.

Thank you for sharing this technique! Often we are kinder to others than we are to ourselves. I hope this idea helps others. I will definitely pass it forward.

After years of remaining SI free I picked up again 3 days ago. Burning this time, every cigarette a penalty. I totally get the control factor, and putting the inside on the outside where it cannot be denied. Its scary though-now that its back its hungry and very much compulsive. I already know it has more control over me than I do over it-ironically!

You did so good for so long! I hope maybe you can discover what triggered it again and address that directly. And also remember how you did it before and use the techniques that work for you. Thank you so much for sharing.

I have bipolar and when I'm on side of depression I self harm by cutting. But I got tell you I haven't cut in almost 3 weeks and the reason is I scared the hell out of myself. First I was scared because I was doing it everyday and I didn't know where it was going to lead to, like the hospital, which I refuse to go to again. Then I also cut deeper than I meant to and that scared me that I didn't have control over it like I thought I had.
Michele

Michele,
I'm not glad you scared yourself but I am proud of you for not cutting in three weeks! You can do it! I hope you are getting some help and support through this process.