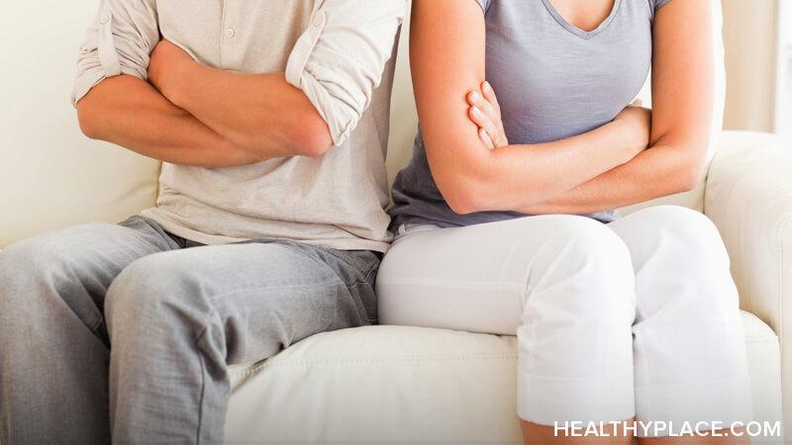 After only a little time of living in abuse, I noticed changes in myself that I didn't like. Back then, I didn't know about codependency. I didn't understand manipulation, control or abuse because I'd never experienced it. I only understood that people could have marital problems and such problems were the faults of both parties (What Are Victims Responsible for in an Abusive Relationship?).

But, looking back, it's obvious that I manipulated my abuser as best I could. I thought that if I did it right, I could make my abuser behave lovingly, or at least less hatefully. I could make him be a better man. Codependency made me think I was powerful enough to control my abuser. And well, isn't the idea that one person can control another the very evil behind the abusive relationship?

Although it is true that I manipulated to keep the peace, controlling behavior used by an abuse victim is as unhealthy as it is for abusers.

Similarities Between Abusive and Codependent Behavior

I wanted my ex-abuser to behave differently, just as he wanted the same from me. I wanted him to behave as if he cared about my feelings and thoughts as much as he cared about whether or not there was food in my belly. He thought his job was to go to work and put food on the table. Period. I thought that was but a portion of his responsibility as a husband and a father. I wanted him to drastically change and become the man I thought he should be.

I attempted to manipulate his moods, primarily to keep him happy. He manipulated my moods to keep me off balance and therefore easier to control.

If I thought I could teach him a lesson about how to be the person I wanted him to be, I would jump on it wholeheartedly, confident that he would see the light this time. He reacted with abusive anger that flooded our home, he'd storm about, bemoaning how I was always trying to change him.

I'd self-righteously think to myself, "You're damn right I'm trying to change you! It is for your own good."

No, changing him would be for my own good. He liked who he was; I am the one who didn't want to accept the truth. I am the one who chose to stay with someone I did not like. I chose to martyr myself for a cause no one else in my family understood.

Manipulation is bad for everyone. Controlling behavior makes you think you could succeed in changing the abuser. Having even a little success in using manipulation and control-- even for the greater good--is part of the reason victims stay in abusive relationships. Call it taking the power back if you like, but it's false power. No one has that kind of power.

Differences Between Abusive and Codependent Behavior

The major difference between abusive and codependent behavior is remorse. When you're abusive, and especially when your control methods have worked, you feel better. Your world is in order. Any apology you make is calculated to be necessary for the win, not because you feel bad about abusing. So long as your abusive behavior accomplished a goal, you feel justified, not remorseful.

When you're codependent and you think you've behaved horribly, usually you feel bad. Maybe not in the moment of your ass-iness, but soon after you've calmed down. Codependents feel remorse and heap more blame upon themselves than anyone should. Hurting someone else feels bad, even if the person you hurt blacked your eye or ripped your heart out. Forgiving yourself for hurting someone else is almost impossible, and codependents go out of their way to make things right--we even accept more abuse as punishment.

To help me learn to forgive myself, my therapist said, "Kellie, look at your motives behind your actions." My motives defended my psyche; they didn't attack his. My nastiness toward him came out when I was backed into a corner (verbal or otherwise). I felt ashamed of myself after reacting to him with anger and name-calling. Unlike my ex-husband's abusive actions, my abuse toward him ceased as soon as I felt free from the corner, and it was quickly followed by remorse and my apologies.

In my remorse, I thought that he was right about me. I was a horrible person, I deserved to be treated poorly because I treated him poorly. I stuck around way too long in my abusive marriage because I did not realize that I was fighting for my freedom. I thought I was fighting because I was a witch with a capital B. But if I had examined my motives honestly, I would have seen that although I was an imperfect human, my motives for wanting to hurt him were, unfortunately, justified.

That was hard to write. It must take awhile to accept the truth.

How to Free Yourself from Codependent Behavior

You can ask this question of yourself whether you're in an abusive relationship or not to help free yourself from other people's will.

Ask yourself, "Why am I doing this?" to help you clarify your motives and thereby expose underlying truths.

For example, when I would panic 15 minutes before his homecoming because the house wasn't clean, I'd ask myself, "Why am I doing this?" The answer was "To avoid his anger."

I couldn't accept that if my abuser wanted to rage (solidify his control over me), it didn't matter how clean my house was. It didn't matter what I did or said, so attempting to avoid abuse by doing things to appease the abuser is pointless.

On the other hand, if my answer was, "Because I am sick and tired of looking at this mess!" then that is a valid reason to clean the house. And don't try to "punish" the abuser by not cleaning the house if you prefer to have it that way too! (Codependent behavior hurts you as much as you hope it hurts someone else. Note: It never hurts someone else as much as it hurts you.)

The point of this question is to ensure you are doing things that you want to do or feel responsible for doing versus what you feel others want you to do.

If you move closer to doing what you feel important and necessary and further from what you think others want from you, you'll benefit yourself because you'll do things that give you a sense of purpose. You'll behave in ways that make you feel proud of yourself and be better able to handle your abuser's nonsense concerning what he or she prefers you do.

Check your motives for doing anything. Make sure your motive is sound. If your motive is to somehow control another person's behavior only, forget it. That's codependent behavior.

Leave your ideas for ending codependency in the comments.

*Whenever you ask yourself a "Why?" question, beware of the rabbit-hole. Remember to answer the question for you, not as your abuser would have you answer it. Read Why? Is the Wrong Question for more information.

Conquering the Stages of Abuse From Victim to Hero
Self-Interest in Abusive Relationships
Steve
August, 11 2011 at 7:19 am

I am getting a lot of the how could you do this to me? You claim I am abusing you, you never do what I say. You do not listen to my requests. I have asked you to do that a hundred times and you still do it wrong.
I never know if she asks herself why. But, I will tell you when I ask myself why I am I doing this? I rarely like the answer. So many times it is so she does not get mad, or start yelling or crying. I must keep her happy. (ugh that is sick).
Then I get upset and snap back and spend the rest of the day asking myself, why did I do that? Oh I am as bad, I might be worse. I am asking her to be different and I am getting upset. All the while forgetting that I have gone through so much pain to be where I am.