My Daughter's Mental Illness Turned My World Upside Down 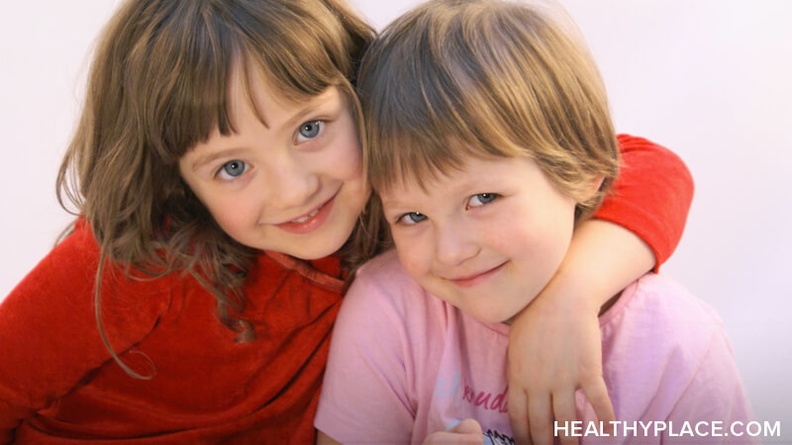 Hello. My name is Rebecca. I am writing in response to the article I just saw on the HealthyPlace website about living with DID. I am a 33 year old mother of 3 little girls and have spent the past 2 years watching my oldest daughter completely fall apart. I watched her go from being a normal, albeit extremely emotional, little girl to not even knowing which parts of her life are based in reality and what is happening in a reality that exists only within her own head.

Out of nowhere, my daughter, at 10 years old, suddenly broke into severe bouts of psychosis, hallucinating horrific things happening over-and-over to all of the people she loves, forgetting her own age, school, family, home, friends, etc. In the hospital and in therapy, she would answer questions about herself incorrectly, sometimes with the answers being consistent for hours or days at a time, even though they were incorrect.

After over a year of intensive in-home and outpatient psychotherapy, repeated stays in Children's Hospital and going through every test that every doctor could possibly think of, with still no clue as to what was causing her repeated fainting spells, severe headaches, catatonic episodes and hallucinations, her psychiatrist and psychotherapy team came to me with a potential new diagnosis; dissociative identity disorder.

Coping with Severe Mental Illness in My Family

I actually hold a bachelor's degree in psychology and thought that I was very knowledgeable about the signs and symptoms of dissociative identity disorder, but would never have associated many of the symptoms I watched my daughter suffer through with this disorder. Our real breakthrough came when my daughter's psychiatrist suggested that the next time she began to fall into one of these hysterical, hallucinatory episodes, that instead of asking her age, school, etc., to try to see if she was still based in reality, that I simply ask her name.

Even with a bachelor's in psychology, I still thought this was a ridiculous request, but agreed to comply. Sure enough, that same day she went into an episode and when I asked her name, it took 20 minutes to convince her that I was not one of the "bad people" that she had been hallucinating, but she still denied that I was her mother and refused to tell me her name. I told her that we had just returned from the ice cream shop and asked what kind of ice cream she had just eaten. At that, she looked at me and said, "wait a minute, are you (daughter's name) mommy?"

This was the beginning of a conversation that lasted all through that night, where numerous alters each came out to introduce themselves and tell me a little bit about what they knew about what was happening to my baby girl. I found out that the original split had occurred when my daughter was only 3 years old and was mauled severely by a rottweiler. This alter was so traumatized that she actually split at some point into twins. After this, every year on her birthday, a new alter was born, to watch out for her, just in case. Yet, every time something emotional did occur, it seems that a new alter was formed to deal with it.

Today, my daughter is 12 years old and I have personally met and spent time with 19 individual alters, not including my daughter herself. Some are young and sweet and fun, some are terrified, and some are just plain mean and angry.

The Impact of My Daughter's Mental Illness

The Nightmare That Is Our Life

It's been almost a year now since we figured out that this is what was going on with my daughter, and it just seems to get harder every day. During the year that she was 11, she was so stressed out and traumatized by the realization of her alters, her missing time periods, and all of the other drama that has been part of her learning about what is happening inside of her mind, that she continued to form new alters throughout the year simply to deal with the new stress of having alters. Currently, I know of 7 alters who are 11 years old.

This condition has been tearing apart our family and our lives and we all feel so isolated and alone. I feel like I must be the only mother in the world raising 20 children all in the same body, all with very different likes and dislikes, who even fight with each other. As stressful as this has been to me and my other daughters, I can't even begin to imagine how difficult it must be for my daughter.

She lost it last week when she realized it was 6 pm and the last thing she remembered was going to bed the night before. She was so upset about the missing time that she convinced herself that she must be dreaming, wrapped up in a blanket, and spent over an hour pinching herself and pounding her head on the floor, trying to wake herself up from the "nightmare" that is her real life.

This disorder has torn our family apart mentally, physically, emotionally and financially. I can't work because I was being called home every day to deal with hallucinatory fits in school or spending weeks at a time in the best hospitals we could find to try to understand what was happening to her. My marriage ended when alters began to come forward and tell me and therapists that my (now ex) husband was abusing her when I was at work.

I tried living with another woman going through a divorce who had children with mental illness as well. That ended after a year of them all having to also deal with tantrums, hallucinations, etc. I'm sitting on the verge of losing my home and even custody of my daughter because it is just so much to deal with and I have now become physically very ill myself and have an extremely difficult time even just keeping up with day-to-day life. We all feel like we are drowning and there is no hope.

The Strain and Stigma of Mental Illness

Please help me to find other families, other mothers, other children, other siblings, friends, who are living this same nightmare. We are desperately in need of help from someone who really understands what we go through every day, especially my daughter. She feels like a freak, she's afraid to tell anyone, even her closest friends, which means that she does and says things to them that she has no recollection of and which has caused repeated problems for her with trying to form and maintain friendships, making her life that much more difficult to process.

I don't know what exactly I really expect from you, I just know that we need help, we need friends, we need understanding, and most of all, we need hope. Please help to put us in touch with other people who might possibly be able to help us understand that there can be hope for her, for us, to still find happiness and live a full and positive life. I just don't know where else to turn.

This post was written by Rebecca, our guest on Tuesday's HealthyPlace Mental Health TV Show on Mental Illness in the Family.

Intersexuality and What Being Intersexual Means
Mental Illness in the Family: Dissociative Identity Disorder
eileen
December, 1 2009 at 9:34 am

Hi. I read your column about you and your daughter's mental illness. Boy, can I unfortunately relate. My eldest, who was almost 15 years old at the time, had what I think was a nervous breakdown. We had her in 4 different psychiatric hospital's in 1 year. Two years later and we are still paying for it.
The final diagnosis was psysotipal (that probably is not spelled right). My younger one was 11 at the time.
There are days I feel just like you - there isn't any help. She has trouble making friends, is depressed a lot in her room (which we try whenever we can to get her out). We are also in financial danger of losing our house.
One thing I know, thank God for a wonderful husband who I have been married to for 20 years last June. I could not have done it without him. Please email me back. I need for my health and well-being to talk to someone who literally understand's what I am going through. God be with you.