Is My Best Enough to Beat Anxiety?

On new habits, chocolate, and not always taking the blame

I'm treating anxiety with copious amounts of Maltesers, and Greens&Blacks. Probably isn't going to help me relax (such as that ever happens) but it makes me feel better about the parts where I sulk and procrastinate because I have deadlines, and everyone else has a long weekend. Anyway, onto the topic du jour:

Is 'my best' enough to stop anxiety -and what is emotional competence, exactly?

I can't tell you how many times I've asked myself that, and still I can only answer: it'd better be! Waking up 'sane', and anxiety-free, doesn't happen by magic. It means giving up old habits, surrendering a little, letting new habits settle in.

Easter/Passover seems like a good time to talk about this sort of thing. About hitting our respective rock-bottoms with anxiety and mental health (or lack thereof), and picking up the pieces. Of short-term losses, and long term gains.

Getting a firmer grip on the whole 'I avoid doing what I want, getting actual needs met, because it might mean feeling more panic now' thing means I can get to that long term stuff. But it's not much fun, and I don't always have the strength, etc.

Hence the eating chocolate, which I really don't need, instead of cozying up to my deadlines and realizing they're not so scary after all.

I have an anxiety disorder, and I'm not always in control 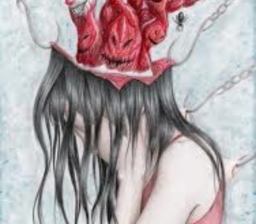 I take extra blame for how powerfully destructive my anxiety disorder can be because it appears to be me, myself, destroying the things I've built. Tearing them down out of spite or petulance, arrogance or immaturity. (Generally, it's none of the above)

The issue I have is in truly accepting that I'm not always in control, and that that's not a stick I should beat myself about the head with; If I stop beating myself up for having a mental illness, I might experience emotional competence (however briefly).
Which whilst apparently a good thing, like a lot of other things that would probably be good for me, or at least better feelings, it would mean losing something.

Really truly accepting that I'm not always in control would leave me unable to blame either the fact that there's little tangible to point to by way of 'illness' (and therefore it's all in my head), or the empty wrappers on the table, for what's going on with me. It would mean:

Knowing myself, and my anxiety

I'm inclined to keep a wary distance from that.

>>What if my head's just broken, forever, and there's nothing I can do?

>>What if everyone else gave up hoping long ago, and they're secretly just waiting for me to do the same?

The other way to look at all that fabulous paranoia and panic is that clearly I don't like what I feel now anyway. It's not like I'm having such a grand time repeatedly being hit with the symptoms of PTSD and anxiety.

The only way to change that is to open up my eyes and tackle whatever's underneath the clouds of fear (which are presently drowned out by the none too distant prospect of a sugar coma).

There isn't a way to treat anxiety that doesn't involve knowing what I'll accept as my best, and actually letting that be enough (versus raising the bar because nothing I do could ever be good enough, and that's that).

What Do You Do When the Help Doesn't Help? Anxiety
My Tragic Relationship with Anxiety: Our First Date
heather
April, 11 2013 at 2:24 am

Over Easter my family had overreacted to a comment I had made and now they disown me because of it and saying horrible things to me which has caused my anxiety to go through the roof. As a result my sleep patterns have only become much worse. My mind is calm at night but I still can't sleep. Conflict only worsens the anxiety and I'm overwhelmed and contributes to worsened sleep patterns.

Definitively, anxiety is our unavoidable and universal personal experience that didn't leave restful anyway. It seems that mankind by anxiety should to pay an harshly duty of its existence, that causes many psychic and emotional suffers as well. Indeed it is one side of true, mild anxiety in other side grow us strong and useful member of society. Besides this, precursory anxiety enable us to be vigilant before unpredictable life dangers. Presumably, we couldn't were carefully and mindful if we have got a feeling of anxiety. After this, we may say that anxiety, amongst other motivate and stimulate us to be alert and active in daily demands. Without this component people would be inert and incapable to accomplish anything. Surely, this isn't a massage of life-giving. But, that didn't mean we should be overload with this displeasing emotion, even modern life has many threatening. In most cases, these life difficulties are imaginable in our mind and couldn't present any real threat on our bio-psycho-social integrity. Moreover, as You Ms White has written, there are moments that we could be quick-tempered and in uncontrolled state, which unconsciously calm and relax our irritable feelings.

Kate :-)
I sometimes treat myself with dark, fair-trade chocolate / a hot, honeyed cup of cocoa / cheese / pie!! / ice cream ... when I feel anxiety swarming ;-)
Interesting word, 'treat.' It applies both to medicine and goodies. During my calmer moments, I try to bridge the two ... I find lately that I often need containment -- and always, I need quiet ...
My 'best' can shift from day to day, sometimes hour to hour. What a balancing act between self-care and shame! --> example: Today I was to visit a cherished family in my neck o' the woods for Easter. I couldn't do it. On comes the shame and the dread that my loved ones are thinking, 'Bah -- Enough of her! Cancelling again!' -- Lately I've had to say 'No' much more often than 'Yes' to invitations ...
The Whatifs are wicked, aren't they!
Know what? -- You're out in the world as a professional blogger; this is definitely some of your 'best' :-) You write with intricate awareness of experience; with humour that's spot-on sharp and expressed with empathy; with curiosity, imagination and intelligence. Your best is right here, and it's a gift to the rest of us :-)
Enjoy your Maltesers xoxo