I Hate Anxiety! The Physiology of Stress

The stress of an anxiety disorder can twist the fabric of life; I can't see it the same way as I did before my "nervous condition" set in. This isn't stage-fright, or make believe. It's not masterpiece theatre. I did not get PTSD from watching too many Twilight Zone episodes.

But I am living my life just in case

Anxiety and PTSD: Jackboots in the Night

Anxiety disorders involve the kind of stress that doesn't care about deadlines, or next month's rent; The kind that means I barricade the door when I sleep, just in case.

Frustratingly, almost incomprehensibly irrational, it's the kind of stress you can't fight because fighting makes it worse, bigger, better at its job. Which is protecting me, whilst simultaneously driving me crazy. Only, I'm not crazy. I'm afraid for real reasons but that really isn't the point.

Nothing about an anxiety disorder is average

One mistake people often make, even people with an anxiety disorder, is to regard the level of anxiety they're dealing with as comparable to other things in life. Anxiety disorders don't conform to scales of reference, nor do they come with a map.

An anxiety disorder isn't just cumulative stress, it's compounded stress. And it's about as much like daily life as taking the train is to surviving a crash. 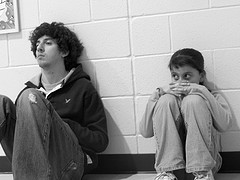 It's almost impossible to beat the physiology of anxiety

Anxiety disorders stem from a hypersensitization of the reptilian brain. Beyond conscious awareness, the amygdala and hippocampus take charge: fight, flight, or freeze. It's ancient, primal fear catapulted into consciousness, lobbing missiles at my frontal lobes until they retreat.

The fear centres of my mind run the show.

It can be a relief to know that - that part of the reason I feel trapped by my anxiety disorder is because that sensation is accurate; I probably have a better chance of winning the lottery than I do of beating the pure physiology of post traumatic stress.

Deep within my brain, within the signals that fire between neurons, within the structures of every cell, there is a beast. In ages past they'd have said I was possessed by a demon and burned me at the stake. Then again I tend to ramble so they probably would have done that anyway.

It's mother nature's greatest gift: the survival instinct. But as with any other force of nature, it can be dangerous, unchecked.

The level of stress most people live with is relatively convenient - generally amenable to goals, ambitions and desires. It will bend to will, with sufficient will; The stress of an anxiety disorder couldn't give a toss how much will I have. It has a big red override button and I've ceased to question its willingness to use that at the slightest provocation.

Anxiety: What Happens When I Don't Know What to Do?
The Top CBT Tips for Psychologists
Barbara
June, 1 2013 at 6:00 am

Tears, Butterfly's and nausea all at once when I stumbled upon these posts ! I'm not exactly sure how it all got started although there are way to many candidates for that position lol. Anyway my life as well has been crumpled up like a unworthy piece of poetry that didn't make the cut in the book of life, and throne to the floor. Unrational fears kept me from going places and being with people that i love, even when they needed me most! now its so bad that i am afraid to eat almost anything in fear of a allergic reaction, and medicine would prob. help but i am afraid to take that now as well. I do need help but am afraid to leave my house ! Oh the tangled web that fear weaves... I don't feel so alone now that i have read some of your thoughts and fears as well. for this i truly do thank you :) any ideas ?

I know how ravaging anxiety can be. It can take over your life and does feel like a prison!
I have created MP3 downloads for the purpose of helping one to relax, give it a try maybe it will help.
www.journeysinward.com

I have anxiety too. It keeps you prison, in your very own house! Your afraid to leave. Even if it's only, to run down & check the mailbox! It makes my stomach start hurting. And I have to just wait for it to pass. Before I can hurry up & leave. It's the worst feeling, in the world!!

Anxiety as unconscious fear present a great clinical problem, apart psychiatric diagnostic and therapeutic challenge. Till now, the psychiatry didn't reach to give a comprehensible explanation that be enable to recover the anxious patient. Therefore, anxiety remains as symbol of human suffering. Close to anxiety is stress as reply of organism to extreme exertion. As it is known, the both of these psychiatric signs dominantly are outside of self-control. Although of this ascertainment our world-outlook moderate the outcome of these psycho-physiologic processes. In this direction, the necessity to understand the anxiety as inevitable life-strength experience should be as starting point of management these common emotional difficulties.

Hi Kate, you put my feelings so accurately in words! I hate it too!