Finding A Safe Place Is Important For PTSD Recovery

For recovery from posttraumatic stress disorder (PTSD), it is important to have a safe place. One time a friend asked, “Dan, have you ever felt safe anywhere?” For years I walked around constantly on high alert and my posttraumatic stress disorder was on full display. Since I grew up in a household where violent domestic abuse occurred, it has been important for me to establish my own safe place in PTSD recovery where I can relax (How to Develop a Safe Place For Mental Illness Recovery).

PTSD Recovery in a Safe Place

I have been working on the effects of abuse, one cause of my symptoms of PTSD, for the last several years. When I was a sensitive and vulnerable eight-year-old boy, my grandmother threatened to have me permanently put in an insane asylum. As the memories have come up and been released, it has been incredibly difficult and stressful. It has been important to have a safe place to work on my PTSD recovery issues.

I love my living space because there are no apartments next to mine. I share no walls with anyone. I feel it's a safe place because there’s no one thumping on a wall next to my apartment (Combat PTSD Symptom: The Exaggerated Startle Response).

I am really sensitive to loud noises, especially late at night when all my traumas happened. My apartment complex is a really safe place, but one time in the middle of the night, two young men started banging loudly on the door of an empty apartment below mine.

I was awake in an instant, breathing rapidly and in complete hypervigilant mode. I calmed enough to call the security number for the complex. A few minutes later an armed security officer showed up, followed a few minutes later by a police car. I know; I was on the balcony watching. After a brief discussion, the two young men left. That experience reminds me that I have found a safe place for my recovery from PTSD. 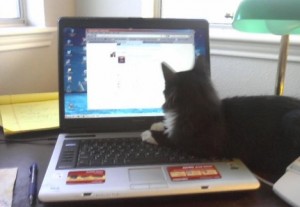 I hadn't owned a pet in several years, and a friend suggested the possibility of getting two
cats who could keep me, and each other, company. Animal therapy has proven to be a brilliant suggestion. I got two rescue tuxedo cats when they were just kittens. My cats seem to realize when I’m anxious, and they will stroke up against my leg, or come lie down next to me, so I can pet them and calm down.

If I feel hypervigilant or have other PTSD symptoms from growing up with trauma, or if I get stirred up by events in the outside world, it is a huge comfort to know I can retreat to my PTSD recovery safe place, pet a cat, calm down and gain control of my fear.

The Importance of a Safe Place for PTSD Recovery

Dan is a PTSD survivor, and author of Healing The Writer: A Personal Account of Overcoming PTSD and Freedom’s Just Another Word. You can connect with Dan on Twitter, Facebook, and Google+, and at his website DanLHays.com.

APA Reference
Hays, D. (2015, November 16). Finding A Safe Place Is Important For PTSD Recovery, HealthyPlace. Retrieved on 2022, May 28 from https://www.healthyplace.com/blogs/traumaptsdblog/2015/11/finding-a-safe-place-is-important-for-ptsd-recovery