Grief, PTSD, and Your Brain

I have been asked by a reader to “explain the interaction between grief and PTSD”. Her brief question also made reference to “"PTSD symptoms" of flashbacks, nightmares, and intrusive thoughts” whose content relates to her “death trauma”. There is a lot to respond to in this query.

As with many common words, most of us don’t much pause when we encounter the word “grief”. It has, however, received a detailed and careful consideration in psychology, and I have written in detail about some aspects of this elsewhere. In summary, grief is a variety of a feeling called distress, which is the brain’s automatic response to loss. It lies on the high end of a continuum that runs from minor loss (say, of your car keys) to extreme loss (such as of a child), which can be called “anguish”. Put into words, that continuum might look like this: distress → sadness → sorrow → grief → anguish. In summary, grief is involuntary, fairly serious, and can become very serious.

Grief that is “pathological”, “prolonged”, “complicated”, or “traumatic” 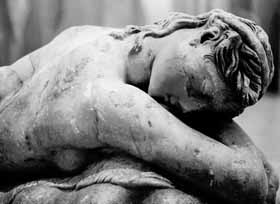 While the terminology used varies, grief that has prolonged symptoms which create serious impairment has been much discussed in professional mental health in recent times. Prolonged grief (but not grief) DOES appear in the DSM-5[1], as bereavement. A specific kind of grief, it is described in the DMS-5 (p. 811) as occurring after the death “of a loved one”. The DSM-IV[2] considered “normal” bereavement to last for up to 2 months; only after that could it be considered for diagnosis as a Major Depressive Disorder. In the DSM-5 that exclusion no longer exists, for at least two solid reasons:

Prolonged or complicated grief is described in the DSM-5 not as a formal diagnosis, but in a section titled “Conditions for Further Study” (p. 783) which is specifically described as presented only to assist research, and “not intended for clinical use” (emphasis in the original). We still don’t have a “prolonged grief” diagnosis. As will be seen, this may actually be the best way of handling the matter, for the real issue with prolonged grief may not be about grief at all, but about that trauma underlying it.

Interaction of trauma and grief

Traumatic grief, which may or may not involve bereavement, is not mentioned at all the DSM-5. Other sources, however, are not so silent. Obviously, a wide range of experiences can be traumatic, such that symptoms of PTSD (which may or may not be sufficient to qualify one for the actual diagnosis) will result. These range from a physical or sexual assault occurring at any point in adulthood to a severely impaired early childhood attachment to parents. Correspondingly, the resulting trauma memories can range from simple to complex. In all cases, I think we can safely make at least three assumptions:

Sequencing the handling of trauma and grief in psychotherapy

Except in cases of traumatic loss, grief does not come up much, if at all, in therapy until a traumatic memory is largely quieted down. “Quieting down” means that psychotherapy removes from your brain the capacity for a memory to be triggered and produce active and noxious feelings. Real trauma therapy removes feelings from memory. The memory narrative is untouched – even clearer in some cases. While there often remains the normal feelings about the event or events that your therapist has when they hear of what happened to you, there is nothing more. This description of the effect of real trauma therapy, I find, may seem unbelievable until until one experiences it in therapy.

I have repeatedly found that most of the time when grief becomes a focus in therapy, we are nearing the end. Noisy trauma memory is much quieter, and it finally becomes possible to view what happened more objectively. One of the first things that one notices is the high cost of the trauma – that it’s caused real loss. That realization produces grief. It is important to know this, however (and this will surprise many people): grief can be processed just like trauma memory itself, with the result that we can typically take care of it in mere minutes. Again, once you experience this, any incredulity you presently have about this prospect will vanish.

Where the trauma is itself about a loss, the emotional load one must carry through the therapy process tends to be larger, but certainly not unbearable. I have, in fact, never found it to be much of a factor limiting psychotherapy. The important exception to this statement, as I have written many times, is chronic abuse/neglect trauma occurring in early childhood. THAT has so many complications that it’s almost a whole other matter – hence the concept of Complex PTSD. That almost always requires longer preparation prior to therapy proper, and a longer period of therapy itself. Still, the outcomes are typically good to very good, and well worth the effort.

In any case, the problems in the case traumatic loss are not due specifically to the binding of trauma and loss, but to the nature and duration of the traumatic experience itself. It is for this reason that I think that the notion of a prolonged grief diagnosis is probably a poor idea. Such cases are probably about grief in the context of a special type of trauma, such that the real issue is the trauma. The associated prolonged grief is merely a side-effect. We do not have a consensus about this yet, however. I think this is likely because most people who deal with grief in professional mental health are not trauma therapists.

When grief comes up in the context of trauma, should you be concerned?

Not at all. Society in general recognizes, understands, and responds much more easily to grief than to trauma, so grief too easily becomes the focus of attention. The real problem is the underlying trauma. In reality, I’ve never dealt with a case of complex grief which failed to quickly resolve once the underlying trauma memory was properly resolved.

There’s more good news: while it is now recognized that “normal” (i.e., typical) grief can easily last one to two years, you do have an option about this. I have found that grief that is NOT traumatic can itself be completely and satisfyingly resolved, just like a trauma memory, using the same methods we use in trauma psychotherapy. If you want, your grief need last only until you see your therapist.

For some people, this concept seems to present a problem. They think that they ought to be in a state of grief for a sustained time, and that if they are not they don’t care about their loss, or that other people will think that they don’t care. Indeed, in a number of cultures (Native American culture in general, I’ve found), it is socially expected that you be in conspicuous mourning (if not grief) for a full year.

Personally, I think it’s fine for you to decide for yourself how to handle your grief. Grief is painful. It has no inherent benefit. It is NOT the same as sadness about a loss, which will remain after any psychotherapy. While you can certainly learn from grief, there IS no “good grief”. No one I know would ever invite grief into their life just to get any supposed benefit. Furthermore, cleanly resolving the pain of grief by means of trauma psychotherapy seems invariably to lead to a sustained period of appreciation for that which has been lost. This experience is positive and, in the case of losses involving a person, clearly respectful. In my opinion, rather managing your grief to please other people, it’s much healthier for you to do whatever YOU want to about your grief, and that could include passing through it very quickly.

And why not? After all, while enduring traumatic memory is a grave failure of your brain’s normal processing of traumatic memories, grief is just a feeling, like any other, and by itself need not be especially disruptive, painful, or enduring.

4. This is explicitly discussed on pages 330-333 of Siegel, D. J. (2012). The developing mind : how relationships and the brain interact to shape who we are. New York: Guilford Press. To manage this trauma-induced impaired emotional regulation in the brain, Siegel specifically recommends SSRIs (selective serotonin reuptake inhibitors). I absolutely concur.

Is Your PTSD Therapy Giving You The Results You Want?
PTSD Healing Goals Work If You Commit to the Present
Alice
September, 30 2018 at 5:48 pm

this makes more sense now. lost husband to suicide in June, 24yr old son in April 2016. i thought my mind was going to explode. Each memory was filled with intense emotions, i could feel the despair each was going through. Never in my life had i felt this way. PA started adjusting my meds, lowering. Horrible was an understatement, my ADD and my brain i describe as 1000 hamsters going around in their wheel. My thoughts and actions were running around in circles, couldnt complete what was important 9yrs at home and landlord takes me to court. i signed papers just so he wouldnt evict me in 48 hrs. Have meds back in order, so much better, im back now but i was scared of dying, did not want to, i knew i needed help, something was definatly wrong this was not normal. I was adopted by elderly parents, seperation/abandoment issues along with physical, emotional and mental abuse as well?????

This was amazing and very hopeful for me! I needed this after losing my mom, and clarifying that it is trauma. Now, I know exactly what I need, and it is crystal clear. I know I have PTSD. Especially, with the simple things on trying to put my moms face(in my mind) on others faces, and obviously others things.
Thank you so much!