The most prevalent question I receive from my Bipolar Babe peer support group participants is, “I met a wonderful guy/girl and she/he wants to take me out on a date, so do I tell them that I have a mental illness?”

It’s a valid question and a concern that many people have right from the start, with good reason. It can be scary telling someone, anyone, for the first time that you have a mental illness due to the stigma that exists in society. In my personal experience, and hearing stories from others, mental health stigma and intimate relationships can spell doom and gloom, or they can provide a positive platform for empowerment and honesty.

The Bipolar Babe and the Stigma of Intimate Relationships

Upon meeting one of my past boyfriends, initially over the phone for many weeks, we talked about everything. Our favorite places to mingle in the city, our pets, relationships with our families, and then after about one week of chatting, I just let it out and told him that I had bipolar disorder. I instantly felt a lump in my throat, and as I continued to explain, he interrupted me and he told me that he, too, did a stint in the local mental hospital when he broke down from a very stressful situation in his past. His honesty was heart-warming and we talked about our mental health and how we stay well. He mentioned that he had dated a lot of other girls who had mental health issues, so he was not judgmental, but felt it could happen to anyone. 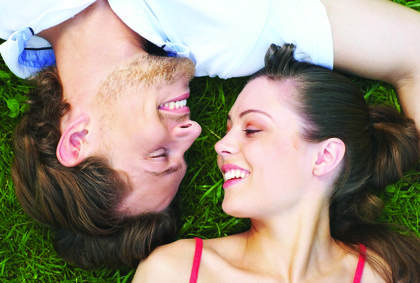 In a second situation, I met a very handsome man at a writing workshop and we were partnered up to share our writing in the class. I read to him about having bipolar disorder and how I founded a charity called The Bipolar Disorder Society of British Columbia. I spoke of how I wanted to rid the world of stigma and how important it is that nobody suffered alone. His eyes lit up and he kept saying things such as “Wow!” and “Amazing!” Later that night I received a heartfelt Facebook message from him explaining how he rarely gets impressed with people, but with me, he was overwhelmed and had not been that inspired in years. I asked him for tea the next day and hence began a beautiful and meaningful relationship that is still solid two-and-a-half years later.

My experiences with approaching men, potential long-term partners, may seem gutsy or very forthright but the experience is different for everyone.

Remember you are worthy of dating and having long-term, intimate relationships, but if someone is hurtful and disappointed that you have a mental illness, that is just mental health stigma clouding their judgement. You will know in your heart when it is the right person to tell and if you are mistaken, then they are not deserving of you in the first place.

Your Social Life and Mental Illness Stigma
What to Do About Mental Health Stigma in the Workplace
Dr Musli Ferati
August, 25 2014 at 12:15 am

I have had varying scenarios. I have attracted people with cluster B personality disorders so they think I am like they are or just never really care about anyone but themselves but they never last long even though trying to break up with them was never pleasant.
My issue is getting to know some as friends when I am stable and then when we decide to take it further and I mention bipolar I disorder they laugh because they often don't see it because my episodes are very long and stability is and they often think that I should be flying off at the handle over everything. I would often screw it up when I was manic either by up and leaving at 2 am and moving 5 hours away out of the blue or being in arguments that I would just keep going all day long because of my symptoms but them not being diagnosed with mental illnesses never meant that they necessarily were infallible and they often acted as if they did. I haven't been in relationship mode in awhile though.
I am seen as attractive from other people so I am often judged for not wanting a relationship. I am not trying to play the "oh boo hoo the poor attractive person" but there are expectations that because people are attracted to me that I should be dying to get in a relationship when I am single but I have been through too many of them that I need to "do me" for awhile. I am grateful for my looks and I know that it gives me advantages in a lot of ways but it also comes with pressure from people that make me wish I was a little less attractive.

I want to share something deeply personal.
One of the greatest gifts my partner ever gave me was the unconditional acceptance of me and my diagnosis. I had been seeing him six weeks and I hadn't been brave enough to tell him yet because I like him so much. We had just been intimate for the first time when I blurted out" I have secret and it's really bad and I am scared to tell you because you might not like me anymore" his response was " you can tell me when you are ready" and he just kept cuddling me. Realising what I had done and worried about what he was thinking I again blurted out I have bipolar and although I can't remember what words I used I said something about if you don't want to be in a relationship with me anymore I understand to which he responded "we can get through anything together" I cried and told him I loved him for the first time and meant it and he said the same to me. Five years later we still love each other.
Prior to that I had an involvement with a guy I cared about but he discussed my bipolar with a nurse who told him 75% of bipolar skill themselves (notice not people with bipolar) kill themselves, when I explained it was at most 25% he was not relieved and I was only ever a "fuck buddy".
Remember true love does happen and me and my partner have weathered many storms designed to break us and have only made us love each other more.

All good ideas. But I think a bipolar person's partner should be ultra-balanced. My ex-partner was very moody and possibly schizophrenic, and although wse had a passionate 13-year relationship, we broke up. We wound each other up.
Now that I'm 60 and quite happy alone, I find dating upsets my equilibrium. I have no more need for drama. (Except in community theatre and choirs!)