The Pain of Self-Stigma Because of Mental Illness 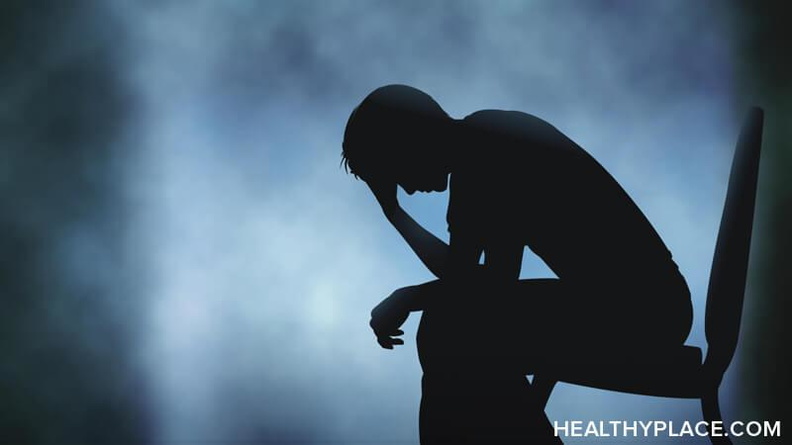 In 1982, I attempted suicide after a failed relationship and ensuing depression. I was taken to the emergency room and made to swallow syrup of Ipecac. After a night of throwing up and crying, I was told that I needed to see a psychiatrist.

I was only 16, and I hated the thought that I was different.

That feeling has never left me.

Painful Self-Stigma Throughout My Life

I've been told I was a moody child from an early age. There were good reasons for this. First, I grew up in a home with a mother battling depression and low self-esteem and a father who was an alcoholic.

Oddly enough, I don't remember much of my childhood in concrete images. Instead, I remember feelings. Feeling the pain of raging migraines. Feeling like I was the ugliest person in the world. Feeling as if something were inherently wrong with me.

Feeling as if I needed to escape anywhere, as long as I was far away from my family, and the hurt and secrets and pain that created me.

For decades, I ran from my past. But the thing is, the past is always with you in your mind - you can't hide from it and you can't escape from it.

The Feeling of Never Belonging

After my suicide attempt and seeing a psychiatrist for several months, I packed my things and headed off to college. This was my chance: to be challenged intellectually, to discover who I really was and, most importantly, to escape.

I fell into a deep depression, and learned that drinking could keep away the feelings of inadequacy and failure.

I went home, defeated. And feeling more different than ever.

Entering the World of Psychiatry

I remember the first time I was prescribed antidepressant medication for my depression. I was in my twenties, and I again was attending college away from home. I was determined to get my degree, and stay away.

The psychiatrist wrote the prescription for Prozac, and then said, "It's only a pill. Just like for diabetes."

I spent the next two decades convinced that I was flawed and wrong and different. I fought the psychiatric label at every chance, ditching my medication constantly just to prove I was normal.

Then I developed anorexia nervosa.

Striving for Self-Acceptance While Feeling the Pain of Self-Stigma

First depression and anxiety. Now anorexia. I tried to convince my psychiatrist and myself that I was not anorexic. I was just thin, that's all, and everyone else was overreacting.

I hated myself. I hated myself for being so different, for having a mental illness, for needing therapy and medication and many, many hospitalizations. Then I found a measure of peace and the beginnings of self-acceptance during my last hospitalization.

I went in starving and not thinking clearly, and convinced that recovery was a farce. A combination of therapy, a new medication, and writing about my thoughts and feelings helped.

I am beginning to realize that I'm not a failure just because I have a mental illness. Instead, I'm different — and that's not a bad thing. The traits that make me different also make me who I am: creative, funny, kind and compassionate, intelligent and more.

I will keep working on it.

APA Reference
Gambrel, A. (2013, August 24). The Pain of Self-Stigma Because of Mental Illness, HealthyPlace. Retrieved on 2023, January 27 from https://www.healthyplace.com/blogs/survivingmentalhealthstigma/2013/08/the-pain-of-self-stigma

Carving Something Beautiful From Rock Bottom
The Role of the Media in Mental Health Stigma
eli
January, 28 2015 at 4:15 am

I have bipolar disorder. It is an illness that I have the same way that tachycardia is, or the same way hypothyroidism is an illness. I have been on medication for it for almost half of my life and I'll have to be on medication to keep stable for the rest of my life. I will never get to choose whether or not I feel great or whether murder looks delicious or whether I should just stop existing or party until my legs fall off. But it doesn't matter. It doesn't matter that I can't pick how I feel because I get to choose what I do. I cannot live on instinct because my instincts are insane, but because I know that it means I'm already more free than most "normal" people. I'm glad you're starting to accept yourself more, and never forget that even if you can't control how you feel you can control your actions and reactions.

After three involuntary hospital admissions for mental illness over a 15 year period, I finally accepted I could no longer deal with my problems alone. I was so needy I wore out all my relationships. Unfortunately it wasn't until late in life when I was completely alone that I came to the realization I needed professional help. Better late than never. It was the hardest thing I have ever done.
I didn't feel good about myself. Having been adopted at birth and then mentally, physically and sexually abused by my adoptive/step parents, I felt flawed at my core. The stigma surrounding mental illness is so crushing. It was just too much to bear, so I fought getting/accepting help for the longest time. I too struggled with an eating disorder (to nurture or not to nurture.). Once I scratched the words "Fat Pig" into my thigh until it bled. It took over a year for the scar to fade. I also struggled with a spending addition (I had problems with selfworth and value). And then the diagnosis of bipolar disorder. I learned that medication alone is not the answer/cure so I kept searching until I finally got the help I needed. Slowly I am learning to like/love myself, flaws and all.

I have dealt with mental illness from childhood and up. Been under treatment and medication. Even participated in clinical trial. I am not either sad or happy. Actually not sure what happiness and content really are. I isolate myself. Fear anyone knowing what I've and going through. What a life to live.

Your comparison of mental disorder with some different person intrigued me so much. Indeed person with mental difficulties ought to be treated in psychiatrist care service, either intra-hospitally or ambulatory. Nothing else. To accept this recommendation it must to understand the necessity of psychiatric help as professional treatment of any mental illnesses. But, it is very hard intention to be resilient toward the load of having any mental disease, at all. This is universal and so inherent attitude around all the world. Self-acceptance to submit professional psychiatric treatment exhibits great impediment. In my clinical psychiatric practice the statement that everyone has got any mental problem has been testify as useful approach. However, psychiatric patient has got different mental disorder.

Hi, .....Wondering when someone will get around to check out my comments and honestly post them...? Regards.

Interesting perspective of your experiences... We live our lives according to what we think about and around our experiences....i do not think you have an illness, just like anybody else who holds on to suffering... Its just that choosing to feel good and keeping that choice active has not been a conscious choice... For whatever reason.... You know, when you label someone or something, you diminish it, you put it in a box and it gets strangled if it accepts that definition. In reality, we choose every moment of our lives how we will view what happens....its not the circumstances that ake the man but the man whokes the circumstances....meaning you give meaning to whatever happens to you. Start seeing the good of what happens...turn your life around...

I liked this because I see so much of myself and what I've done in this. I also like that it's not an end, if you know what I mean? I'm in that process too of removing that self stigma. I have so many other traits and I need to start focusing on them!