Misconceptions surrounding mental health can be a major contributing factor to mental health stigma. The less something is understood, the more likely it is to be stigmatized against.

Although there are probably hundreds of common misconceptions about mental illness, I thought I would tackle a few mental health myths here today. 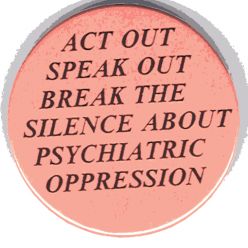 When some people hear the word mental illness, images of old decrepit psych hospitals on the top of a hill on the outskirts of time come to mind. People may think that once you are sent to one of these places, you will never return, or if you do, never be the same. I am living proof that this is a myth without any basis in fact or reality.

I was psychotic, suicidal, manic and paranoid and now lead a very productive and healthy life with no symptoms of mental illness due to finding the right medication as well as a wonderful therapist.

Myth #2: People Who Are Mentally Ill are Violent

This is perhaps one of the most common and destructive myths. But in fact, research indicates that people being treated for a mental illness are no more likely to be violent than the general population. People with a mental illness are actually much more likely to harm themselves than to ever harm someone else. Much of the misunderstanding surrounding this myth stems from the media’s portrayal of the mentally ill as violent and out of control.

Although I never went through ECT, it was definitely brought up at several points during my depression. But I always issued a firm ‘no’ mainly due to the myths surrounding it. I could not get images from One Flew Over the Cuckoo’s Nest or Requiem for a Dream out of my mind that portray it as more terrifying than the illness itself. In fact, ECT therapy for depression has given thousands of people with debilitating depression a new lease on life. And patients are asleep and under anaesthesia for they do not feel anything. For an inside look into ECT, check out ‘Electroboy’ by Andy Behrman.

Myth #4: Schizophrenia and Dissociative Identity Disorder are the Same

This is a surprisingly common myth that I can’t quite figure out. But since I work in the mental health field, often with people suffering from schizophrenia, I am often asked how I deal with their different personalities. The short answer to that question is that schizophrenia and DID (formerly Multiple Personality Disorder) are completely separate and can barely even be compared to one another. Schizophrenia involves audio and visual hallucinations, paranoia and delusions where DID is, according to the Diagnostic and Statistical Manual of Mental Disorders ‘the presence of two or more distinct identities or personality states...that recurrently take control of behavior.’

Stigma requires misinformation in order to flourish. If we can slowly start tackling these mental health myths in our everyday life, we can only help life the burden of stigma from those whom it affects most.

Have You Ever Lied About Having a Mental Illness?
The Stigma of Being an Addict on Parole
Dr Musli Ferati
June, 24 2012 at 1:04 am

The theme of stigma on mental health, respectively mental disorders, is virtually alarming one, against numerous formal and declarative antistigma initiatives and projects as well. Your modest and authentic contribution on unmasking some misconception on mental health through four myths on mental ill person and their psychiatric treatment indicates once more that we are still far away to understand the real nature of mental health and its disorders. In order to overcome this blushful current attitude and world-out-look it should to make effort to explain the basic elements of genuine mental health functioning, that are surprisingly very close and intertwined with disturbances that occurred in person with psychiatric entity.Meanwhile, the crucial step in this direction is the two thousand olden fact that our brain is material foundation of whole psychological activity and performances. The portraiture of this veracity would damaging many misconceptions and myths on mental disease as disorders of brain.

have kept a blog/diary about my mental health for the last 3 years- It might be of help to others.If you would like to read it, the address is http://survivingmentalhealth.blogspot.com

for me, mental illness is used in the creation of artwork. This leaves me permanently tired, and I need a vacation. But I try and meet people, on face value, not judging them on gossip or stigma of mental health sufferers. Many people have shades of innate , not everyone is diagnosed or helped (maybe because, the whole world would need helping !!!) I have tried to keep a blog, to do with my mental health. The address is; survivingmentalhealth@blogspot.com

Thank you for the comment. So great to hear of someone who has triumphed over mental illness and now has find the right combination. Keep up the great work!

That is so true, people thinking you go to the hospital on the hill, and are never the same again. It has taken me over 10 years of illness, schizoaffective disorder....to finally find a good group of drugs that treat symptoms of paranoia, depression, antisocial behavior etc. and it really is nice that I can now talk with some of my family members openly about my illness without them putting me into a catagory of "crazy". I am a person with an illness. It is also a wonderful thing that I have found a doctor that listens and works with me on my medication. Life is good now : )