From Inside An Eating Disorder: Why I Didn't Want To Recover

Deciding to recover from anorexia was not an easy decision. In my experience, it has been one step forward and three strides sprinting backwards. It was hard to make that decision and stick to it. And it was hard for family and friends to understand why I was so ambivalent about eating disorder recovery - after all, wasn't living with an eating disorder miserable? Why wouldn't I want to get better?

I've struggled as to whether or not to publish this excerpt from my personal journals. In the end, I have decided to publish it, not so much for those of us who struggle with eating disorders. We know how it feels to be in the middle of this, to wish for death as a way out. This is for the family and friends -- it is my hope that reading these words (which are as painful for me to read now as they were for me to write at the time) will help you understand some of the "I want to recover -- I don't want to recover" back and forth that we cycle through in early recovery.

April 2012 (About 5 Days into inpatient treatment):

Dear Jessica - way to f**k up - yet again. Nothing is ever going to get better. I should just save everyone the time and trouble and money and just off myself now...I was such a fool to come here. I have no desire to give up my eating disorder or self-harm. All the assignments I've done that sound moderately hopeful about recovery? Bull. My treatment goals for while I'm here? Bull. I just want to get out of here ASAP so I can go home and go back to my impending death.

Half the time I'm crying it's because I'm being forced to live. Every bite of food, every sip of water, every one of those damn tube feedings meant one thing: I'm going to live and wake up tomorrow. And that is its own sort of torture and hell.

I don't even really have answers for why I was sobbing at half the meals and snacks today beyond that. Yes, they are fear foods. Yes, it is far more calories than I'm accustomed to. Yes, I'm convinced what I've eaten today is going to make me 10 pounds heavier on the scale tomorrow. But the last one wouldn't really matter if I didn't wake up tomorrow, would it?

So really, the bigger problem is that there is a tomorrow. 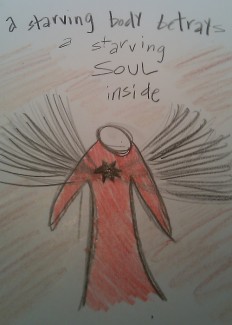 When I consider what I would have missed if I had left the world then, I am glad I stuck around. Friends have had babies that I get to cuddle. I have been on beautiful, awe-inspiring hikes. I have learned so much -- both inside and outside of the classroom. The smiles are genuine now, something that hasn't happened in years.

I am certainly not saying that all is hunky-dory and I am happy all the time. I'm not. It's still a struggle. There are still days when I would rather skip dinner and go for a run. But things are better than I could have ever imagined when I was in the place where I was wishing for death.

Guys, it does get better. Please stick around so you can see how much better it gets.

If you are considering suicide, let someone you trust know. Call the National Suicide Prevention Lifeline at 1-800-273-8255. Get to an emergency room. Your life is worth it.

If your loved one is considering suicide (or if you think they might be), take the initiative and get them to a hospital or psychiatrist. Even if they hate you in that moment or for months after, they will be thankful eventually.

(And for another view into the eating disordered brain, check out the first From Inside An Eating Disorder blog.)

APA Reference
Hudgens, J. (2014, July 8). From Inside An Eating Disorder: Why I Didn't Want To Recover, HealthyPlace. Retrieved on 2021, March 4 from https://www.healthyplace.com/blogs/survivinged/2014/07/from-inside-an-eating-disorder-why-i-didnt-want-to-recover

Thank you so much for sharing. Sometimes just knowing you are not the only one out there feeling these things helps more than anything else. ♡

Way to go, Jess. Thanks for the insight, even if it was painful. I hope it helps folks.

Absolutely it does get better and it's when it does that the alternative we thought of makes it seem like it was someone else's lfe, not ours which we were living. I'm so glad I read you today, once again ;)