Who Really Looks Like They Have An Eating Disorder?

If there were one message I would want to beat into the collective conscious of our culture, it would be this: You can have an eating disorder at any weight, shape, or size. It seems that no matter how many eating disorder awareness weeks we have, we continue to have this idea of eating disorders that is dominated by Karen Carpenter, Mary-Kate Olsen, and a handful of other famous anorexics. Strangely, this belief seems to go both ways. If you are very thin, you must have an eating disorder, right?

If You Look Like You Have an Eating Disorder, Does it Mean You Have One?

She is thin, but some people are naturally thinner. Some people are naturally larger. Such is the nature of the human genome - and that is what makes this world an interesting and beautiful place to be in. It's lovely to walk across my university campus and see people of all shapes, colors, sizes - seeing thousands of people that look like me would be incredibly boring.

I'll spare you all of the details, but in short, Yale's health services spent five months harassing this young woman and trying to force her to gain weight. I'm sure this woman was incredibly frustrated by the ignorance of these medical professionals. For that matter, as someone who didn't weight XX pounds (or whatever arbitrary number you have to hit to "look" like you have an eating disorder) at her sickest, I am incredibly frustrated.

The Problem of the Eating Disorder Image 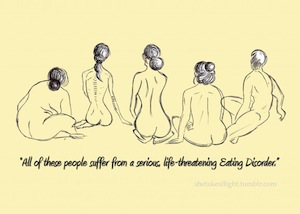 And the majority of these men and women will fly under the radar because they don't fit our idea of what looks like an eating disorder. Every day, thousands of men and women are seen in doctor's offices, urgent care facilities, and emergency rooms and the medical community overlooks what is staring them in the face. Sometimes, these doctors and nurses actually say out loud things that minimize the struggle and broadcast their ignorance. Thousands of men and women will continue to believe that they are not actually sick because they don't "look" like they have an eating disorder.

Yes, some people will "look" like they have an eating disorder. But many won't. We may not see the stories in the news of normal weight (or overweight) people dying of their eating disorders, but it happens every day. Just because someone doesn't fit your image of "eating disorder" does not mean they are not very, very sick.

APA Reference
Hudgens, J. (2014, April 17). Who Really Looks Like They Have An Eating Disorder?, HealthyPlace. Retrieved on 2023, February 3 from https://www.healthyplace.com/blogs/survivinged/2014/04/who-really-looks

finally someone tells it just how it is

Yes, open your eyes, because the world is full of people fighting a quiet struggle and not bearing visible signs of it. Thanks Jess! :)

Thank you for this post. This is something that I am struggling with right now. As an overweight young woman with bulimia, I am just not sure where I fit in. And because I am over weight I feel like I don't have an eating disorder. So thank you for sharing this.

Colleen -
I'm glad this has validated your experience. I know how awful it is be constantly second guessing yourself because you feel like you don't "look" like you have an eating disorder. Actually, more people have eating disorders at "normal" weights - that's just not what the media shows us.
Stay strong!
j :)

Jess, thanks for another amazing post. I remember when you first put up that picture and talked about the various forms of eating disorders. It was eye-opening for me then as I confess I was one of those who unconsciously thought I knew what an eating disorder looked like. Thanks to you, I know I don't. Thanks for the reminder. Have a good one.