Anorexia Relapse and Never Giving Up

I have been struggling to eat normally — whatever normal is — for several weeks. It's not that I have stopped eating altogether, because let's face it, even anorexics have to eat something. It's not even that I'm in starvation mode — yet.

It has just become easier to skip breakfast, because hey, it is 10 a.m. before I think about it and it is only two hours away from lunch. Then lunchtime comes and I "forget" to eat until about 2 or 3 p.m. That's too close for dinner, so I might as well make lunch do for dinner, too.

Still, I am eating and I am committed to recovery. I know that I was not healthy before and that I need to continue to eat healthy and maintain my weight. I know that skipping meals, especially breakfast, is not a good idea.

I thought I was doing okay. Then I drank several glasses of wine last night. 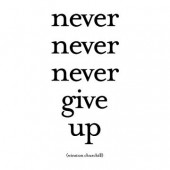 It is easy to think that I should have recognized the danger signs of anorexia relapse. The increasing fears of food. The growing dissatisfaction with my body. The ramped-up self-hatred and self-abuse. The feelings of loneliness and the belief that nobody will ever want to be with me. The difficulties in dealing with everyday life events.

Add a major stressor, and you have a recipe for an eating disorder relapse.

As many of you know, I was hospitalized for anorexia and alcoholism this past December. My eating disorders psychiatrist and I decided I needed inpatient treatment because:

The combination of too much alcohol and too little food essentially meant that I was starving although, in fact, I had not lost any weight because of the calories in alcohol.

Then, there was the danger that the mixture of alcohol and pills could be fatal.

I wanted to live and that's why I agreed to go inpatient. But more than that, I wanted the psychic pain to stop.

So why had I been restricting my food? Why did I decide to drink last night?

Anatomy of an Eating Disorder Relapse

No one with an eating disorder plans to relapse. It just sneaks up on you when you are at your most vulnerable, striking you unawares, until one day you realize that you are no longer recovering, but instead you are struggling to get back on track.

It can be easy to fall back into old patterns. Sway from your meal plan; not eating the right foods. Cut out the snacks because it is too much trouble, and hey, you're not really hungry, anyway. Don't make healthy food because you live alone and it is too much trouble; it is much easier to just throw something in the microwave. Eat less, or binge and purge, or binge, because hey, you have already screwed up, so what's the point?

Go to the local drugstore and purchase a cheap bottle of wine. Or beer. Or whatever.

That is a tremendous realization for me. In the past, I would have beaten myself up. I would have said to myself, "Well, I've blown it and I'm a loser and I should just give up..."

Now I'm all about not giving up. Thank you, Winston Churchill, for these simple, yet profound words.

NEDA Week 2012: Everybody Knows Somebody (Part 2)
The Emotional Roller Coaster of Eating Disorder Recovery
Anjelina
March, 15 2012 at 2:27 am

I have found your blog posts helpful in my daily attempt at recovery. Thank you for being realistic and honest about your struggles. I'm so glad you have not given up. :)