Should Both Partners in a Relationship Go To Therapy?

When you are in treatment for a mental illness, you’ve likely undergone a certain amount of talk therapy. If you’re well into recovery, you may very well have experienced years of therapy and, hopefully, a measure of success at uncovering and eliminating negative patterns and gaining self-awareness. So, if you’ve walked the path to psychological enlightenment, disease management and overall mental health, can you have a romantic relationship with someone who’s never been in therapy? 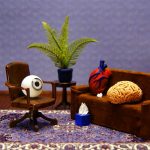 As regular readers know, I'm in the middle of a quasi-reconciliation with my ex-boyfriend Bob. We've spent some time getting to know each other again and exploring the more emotional areas of our relationship, which has lead to the knowledge that we have non-platonic feelings for each other. The problem is that Bob has some "issues" about intimacy and trust that by his own admission need some solid time on the couch to go through. I, on the other hand, have had so much therapy that I frequently lapse into psychoanalysis during casual conversation. Of course, I’ve taken to “treating” Bob during our nightly phone calls.

Psychoanalyzing Your Significant Other is NOT a Good Idea

To be clear, Bob doesn't suffer from any mental illness. Rather, he - like the average person - has some life baggage

that affects his approach to relationships. In discussing our current arrangement, Bob confessed that his attraction to/feelings for me make him feel “vulnerable”, that I have the ability to “make [him] do whatever I want”. Needless to say, he doesn’t like feeling that way. The therapy veteran in me pointed out the connection between real emotions and vulnerability, while also bringing up the inherent lack of trust underlying his comments. I mean, does he not trust me not to exploit his vulnerability? Or does he not trust himself when in a vulnerable state? When I posed those very interesting questions to Bob, he responded with “I’m not ready to sit on the couch yet.” Perhaps I should have stayed in the role of potential girlfriend rather than venture into armchair therapist territory.

Now that I’ve gotten into Bob’s head, I have to process everything I know for myself. When we first dated, I believed that he didn't care enough about me to want a serious relationship. Of course, my inner monologue at the time was about being unworthy of love, so my assessment of Bob fit in well with my negative self-talk. Now that I have more honest information about Bob’s real feelings, his past behavior makes a lot more sense, but I still have my own choices to make. Can I expend energy relating to Bob when he’s not open to confronting his apparent fear of intimacy? Should I wait patiently for him to start processing his feelings, and if he does, will I be his choice of romantic partner? Can our friendship survive if he never confronts his issues and chooses to be with a woman that doesn’t test his control?

Tags: love relationships and mental illness couples therapy should your partner go to therapy dating someone with mental ilness understanding fear of commitment dating while bipolar how to psychoanalyze your partner

APA Reference
Lloyd, T. (2012, January 19). Should Both Partners in a Relationship Go To Therapy?, HealthyPlace. Retrieved on 2023, January 30 from https://www.healthyplace.com/blogs/relationshipsandmentalillness/2012/01/should-both-partners-in-a-relationship-go-to-therapy

I think it's commendable when your partner engages in therapy to support his or her spruce or loved one. It's so easy to want to feel like its not your issue and your partner should seek treatment alone. Mental health disorders affect the whole system. It is so helpful to have both participate and learn together how to cope and gain awareness of how to improve the quality of each others lives individually and as a team.

Hi Deltra,
Like yourself I have been through years of therapy. In my experiences of relationships it has been very difficult to continue the relationship when I have been unwell. I have been in 3 serious relationships that have lasted 1 year, 1 year, and 4 years respectively. The first two relationships ended because of the strain that my illness (Depression & Anxiety) put on the relationship. It takes a very understanding partner to handle the stress and emotions of someone who is depressed. I tend to psycho analyze my partner as well. For me it comes naturally to me now after all the therapy I have had over the years. I know my partner didn't have a mental illness but I still wanted to help her sought out her issues etc. Looking back on it now it may not have helped her. The intention was to help her and also to satisfy my curiosity. I can't help psycho analyzing people anymore! Its instinct for me!

The process of treatment from any psychiatric illness embraces a complex bio-psycho-social approach that should to prolong long time. In this perplex of medical and psycho-social interventions, the role and place of partner in relationship is of crucial importance. Furthermore, the influence of partner's attitude and/or reaction toward yourself mental disorder determines both the boundaries of recovering and the maintenance factors to same recovery. Otherwise, the treatment of respective mental disorder would be only a rudimentary and temporary psychiatric undertaking. Beside this veracity, the probabilities to relapse would rise many times.Surely, this isn't6 the current intention to psychiatric treatment and management of these damned and sorrowful humane hurts.