School Refusal and Your Child With Mental Illness 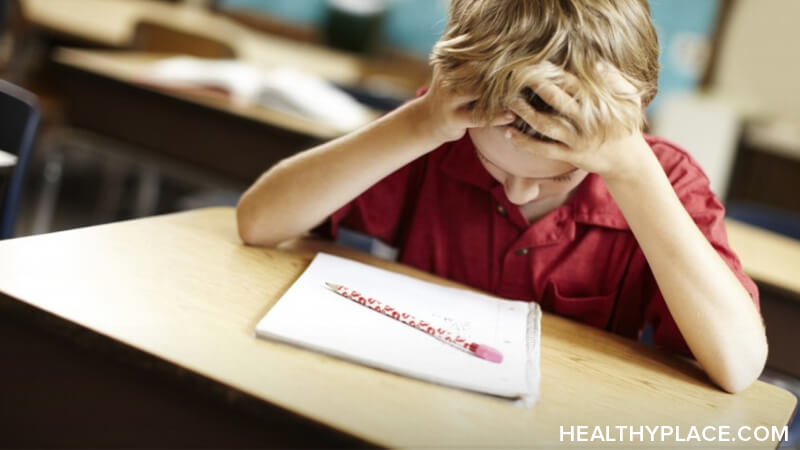 For a child with mental illness, school refusal can be common. School can be anxiety-provoking for children with mental illnesses (School Anxiety in Children: Signs, Causes, Treatments). School refusal is anxiety-provoking for parents. Working parents have the added layer of inflexible timelines. Being late to work daily may get them fired, and the employer doesn't necessarily care about our struggles with our children. So what can we do as parents to get our mentally ill children past school refusal?

The Anxiety Behind School Refusal for Mentally Ill Kids

This is forefront in my mind because it happened today. My son constantly complains about school, and I have feared for years that he may simply refuse to go. He's tried in the past but was small enough that I could pick him up and put him the car myself. He's too big for that now, though, and if you touch him during an outburst, he's more likely to harm himself or others. Usually, though, he limits his school-anxiety to yelling every morning. He takes an hour to put on his clothes or refuses to leave without a post-breakfast snack. This is frustrating, but he still goes.

Today, though, he flopped on the floor like a five-foot sack of flour and refused to budge. I threatened to remove privileges. I attempted bribes. Eventually, it devolved into yelling, and then he closed his door to finally get dressed, only to open his window and sneak outside.

By the time I got him inside and got meds and food in him, I had to bow my head and cry while my daughter hugged me. It was two hours past school start time. It was four hours since I first woke them.

How to Deal With School Refusal

Here are some tips for parents of students with school refusal.

Number one is to remain calm (note: I failed).

I'm most emphatic about this tip, though: not allowing "crutches". I can't allow my child to come home early or stay home from school if it's avoidable. Staying home is a reward. He liked out-of-school suspensions, for instance. After the first, he would act out in class and say he was trying to get in trouble so he could go home. We worked with the school to make sure suspensions were always in-school if his behaviors weren't dangerous.

School refusal from mentally ill kids can feel like a punishment for working parents. It affects our livelihood, and we run the risk of growing resentful of our children as a result. I have met resentful parents of children with mental illnesses, and it's hard to watch. I can't imagine what it feels like for their children who surely notice it. So get help from the school, work, family, or therapy if needed.

Remember to Take Care of Your Feelings Too

I'm still trying to manage my own feelings following this morning's school refusal debacle. Here are a few things I try to think about to keep the aforementioned resentment away:

Yes, the last one is shaky, but let me have my optimism for now. I need every little bit of it.

APA Reference
David, M. (2017, May 22). School Refusal and Your Child With Mental Illness, HealthyPlace. Retrieved on 2022, November 27 from https://www.healthyplace.com/blogs/parentingchildwithmentalillness/2017/05/school-refusal-in-your-child-with-mental-illness

Melissa David is a mother based out of Minnesota. She has two young children, one of whom struggles with mental illness.The support and wisdom of other parents proved invaluable to her in raising both her children; and so she hopes to pay it forward to other parents via Life With Bob. You can find her on Facebook and Twitter.
Staying Mentally Healthy for Your Child with Mental Illness
Autism vs. Childhood Mental Illness
Melissa S.
August, 5 2017 at 4:15 am

I am already dreading the start of the new school year and it's a month off. My daughter is almost 17, going into her senior year, and the last few years have been a constant up and down with school. She is my height and outweighs me by 70 pounds, so I'm way past being able to physically move her and dress her and put her in the car. She's the youngest of 5 and I'm divorced so it's just me having that battle day after day. I gave up at the end of last year and let her finish the year at home, just going in for finals, which I had to stay in the room for to stave off her having a panic attack. Luckily her teachers and school were very accommodating, but what will this year bring? Will she be able to go to college? I enrolled her in a program in which she'll get an associate's degree at the same time (IF) she graduates high school, but will she be able to go on? Will she be employable? I am emotionally exhausted. So relieved to read that school refusal is not just an issue in my house.

With both parents teachers, one University prof & one high school teacher, now on disability & living at home... In those days, I often asked for us to get live at home teaching, some people did that & there was always a no - I've been suffering all my life with various anxiety disorders, the main ones being APD & Asperger's Syndrome (also DPD, OCD, perfectionism disorder, depression & agoraphobia). My mother needed at least a few hours on her one because of suffering from anxiety problems herself. It would be good for one's parent to accept herself from suffering from mental health issues in order to be able to get help for her children as well.

This is very helpful, thank you for sharing.

Thank you so much for sharing your story, Melissa. I have clients who are currently going through similar situations with their own children, so please don't ever feel alone. I appreciate you sharing those tips too, thank you! :-)

I think this is such a wonderfully honest read! How refreshing, and comforting for other parents to read. I think your suggestions for dealing with behavior, that of your child and trying to manage your own is so thoughtful. Your suggestions about work, and making sure to not allow staying home to become a reward are huge pointers. Remembering the positives is such a fantastic suggestion. So often we forget how our own energy, responses and reactions can alter our child's mood (even when they seem unreachable mid-tantrum) but trying to remain calm and positive, and understanding can make a strong difference in the situation for all parties involved.