Lesser Crimes of Siblings Often Too Easy to Ignore

It has come to our attention recently that our child is kind of a brat.

I'm not talking about Bob--I'm talking about his younger brother, "Two." It seems we pay such close attention to Bob (particularly this time of year), we've completely failed to notice the other little monster we're creating. 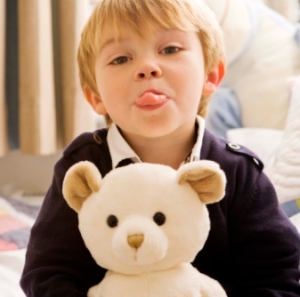 It's not that we ignore Two--to the contrary, we pay as much attention to him as Bob will allow. I think what's happened is a sort of desensitization to "regular" kid transgressions. We've grown so accustomed to the over-the-top antics of Bob, we barely notice the little crimes committed by his little brother.

An example is Two's latest habit of putting his finger to his lips and telling us to "shhhh!" when he isn't interested in listening to us. Part of it could be that he's still (being only two) painfully cute. Part of it could be it took him so long to say anything we still find every word adorable. And part of it could be we're so used to Bob's angry declarations like "Oh Em Gee, I can't hear ANYTHING because you all won't shut up!" that a simple "shhhh!" really is cute by comparison.

And honestly, Two's "bad" behavior pales in the shadow of Bob's. When Two throws a tantrum, it's hard for me not to laugh (if he could see the tantrums that came before him, he probably wouldn't even bother). I used to get phone calls from preschool about hitting, biting, kicking, and stabbing with pencils. So when I hear about Two sticking out his tongue at a classmate, it hardly seems worth writing home about.

What my husband and I have to force ourselves to remember is that it is worth writing home about--as is the "shhh"-ing and the tantruming and all the other undesirable behaviors toddlers normally exhibit. They may not be nearly as extreme as Bob's were (and sometimes still are), but if we don't do our part as parents and teach him they're not acceptable, eventually, they could be.

It's hard not to get so caught up in my elation over having an "easy" (by comparison) child that I let discipline fly out the window. But part of loving a child is discipline--teaching him how to act as part of a group. Often I'm so exhausted from trying to do that with Bob, it hardly seems worth admonishing a toddler for shushing his grandma. But it has to be done, like it or not. So buckle down, we must.

I'll still probably think most of his badness is cute. I'll just have to keep it to myself.

APA Reference
McClanahan, A. (2011, February 17). Lesser Crimes of Siblings Often Too Easy to Ignore, HealthyPlace. Retrieved on 2022, June 26 from https://www.healthyplace.com/blogs/parentingchildwithmentalillness/2011/02/lesser-crimes-of-siblings-often-too-easy-to-ignore