The Importance of Surrender to the Disease of Drug Addiction

Surrender (v) - to give oneself up, as into the power of another; submit or yield.

Addiction is a powerful thing. For millions that live with this disease, life can be a constant struggle to go on from day to day. Often, despite their own best efforts, many addicts have difficulty coming to terms with their illness. This is often displayed in the form of such defense mechanisms as denial, blaming, and intellectualization, to name but a few

In the movie, Flight, starring Denzel Washington, the main character attempts to deal with his substance addiction by using these defense mechanisms and lying his way into a situation he cannot get himself out of. How many of us have done this? In my active addiction I regularly attempted to cover up my using by hiding my behavior in any number of ways. But in the end, I could only see that what I was doing was slowly but surely wearing me down and putting my future in jeopardy.

The Moment of Surrender

Finally, while in an outpatient counseling session, my therapist gave me an ultimatum. Either I go to rehab, a self-help meeting, 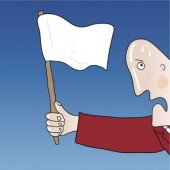 or end up back in the psychiatric hospital where I had been routinely admitted for the previous seven years. Not wanting to tell my employer that I had a drug problem and also not wanting to deal with another hospitalization I chose the self-help meeting.

It was through this decision that I began to surrender to the disease of addiction. What I mean by that is that I no longer had to fight and struggle. I could finally admit that I had a problem and that I needed help This decision laid the foundation for my recovery for years to come.

Surrender is a never ending concept. One does not simply surrender to one’s addiction once. Surrender is necessary
every day since the disease of addiction manifests itself in so many ways. Yes, some days are better than others, but in the end, when we surrender on a regular basis we come to understand that we do not have to do this thing called recovery all by ourselves. For many in recovery, surrender to the will of a Higher Power is another form of surrender. By acknowledging that we do not have all the answers we are able to remain humble and improve our lives.

The origin of the white flag of surrender goes back to the Eastern Han dynasty. For me, it signifies a state of mind – one in which I know that there is no way I can safely use drugs or alcohol. It is through this realization that I am winning the fight.

APA Reference
Shallowhorn, K. (2013, February 11). The Importance of Surrender to the Disease of Drug Addiction, HealthyPlace. Retrieved on 2021, October 24 from https://www.healthyplace.com/blogs/debunkingaddiction/2013/02/the-importance-of-surrender-to-the-disease-of-drug-addiction

Okay, are you an academic or an addict?
If you're the former, you aren't qualified to answer the question.
The latter, you're probably in denial.