You May Feel Alone in Your Depression but You Aren't Alone

One of depression's main symptoms is feeling alone, like no one in the world could possibly understand your situation, your pain, or your experience. You feel cut off from other people, like there's a glass wall between you and the rest of the world. The feeling of being alone can can make you want to isolate yourself from friends, family, and other people who care about us. Isolation feeds depression.

The story is about a little wave, bobbing along in the ocean, having a grand old time. He's enjoying the wind and the fresh air - until he notices the other waves in front of him, crashing against the shore.

"My God, this is terrible," the wave says. "Look what's going to happen to me!"

Then along comes another wave. It sees the first wave, looking grim, and it says to him, "Why do you look so sad?"

The first wave says, "You don't understand! We're all going to crash! All of us waves are going to be nothing! Isn't it terrible?"

The second wave says, "No, YOU don't understand. You're not a wave, you're part of the ocean."

We are part of an ocean of human beings who feel the same emotions we do.

While being realistic in describing our feelings of being alone in our depression is important, we need to remember that feelings aren't facts.

Depression is Common and Pain is Universal

Depression affects 20% of women and 12% of men at some point in their lives. That's a lot of people. Every one of those people feel alone, but they aren't, not entirely.

It helps me to remember that even though I have many mental health diagnoses like depression, I was born a human being. Every human being on this planet feels pain, even if they don't have depression.

Depression is a mental illness that affects human beings. My struggles are struggles of the human race. It is not my fault for feeling sad or alone, and neither is it yours. Pain is part of living, part of a giant pattern across the globe. 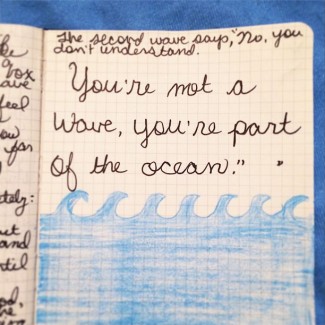 We may not always feel able to stand back and say, "I'm part of the ocean." The world may not always look or feel beautiful to us; some days the world feels like a giant planet of nothing but hurt to me.

Challenge yourself to take a step back and remind yourself that you are not alone. We are all part a giant swirling universe with patterns we are too small to understand. It doesn't mean the big picture isn't beautiful.

APA Reference
Schulthies, E. (2014, November 6). You May Feel Alone in Your Depression but You Aren't Alone, HealthyPlace. Retrieved on 2022, August 11 from https://www.healthyplace.com/blogs/copingwithdepression/2014/11/you-may-feel-alone-in-your-depression-but-you-arent-alone

Depression and Writing As A Coping Skill
Unemployment and Depression With Anxiety
denise rogers
June, 7 2016 at 5:43 pm

" You made feel alone in your depression,but you are'n't alone." The answer is that I am alone, after all my hard work to be productive and healthy. The clinic I attended for over a year for counseling and medication recently told me that each of my mental health visits will be charge a $40 co-payment. They also presented me with a bill for 6 months of past services. I think a better response to tittle might be "You made feel alone in your depression, but seeking help and you will be alone and abandon."

The feeling of loneliness is universal emotional experience, so it didn't mean to live and to work with this ruinous sense, because it nourish numerous mental disorders, including depression, as well. Social withdraw and self-isolation exhibit the destructive behave against the flow of mental disorders, as typical tribute to up to date living, wherever and whenever of the globe. Thus it impose the necessity to overcome this kind of antisocial disengagement. To achieve this intention it is value to learn and to accept the basic knowledge on real emotional functioning of human beings, in order to avoid the sprain emotional experiences from destructive and toxic relationships and disdain conversations. The first step to this utilitarian objective is our ability to think and to speak in third personal pronoun instead the first one as common rueful practice. The second undertaking is our readiness to avoid antisocial persons, because they incorrectly abuse others for their insatiated ambitions. However, it ought to remind that social network improve, strength and enrich our personal. occupational and social welfare. With these and many others benefits of interpersonal relationships surely and in steadiness way we shall counteract the emotional corroding of depression.

I think feeling alone is part of the depression and a result of the depression, if that makes sense. I'm a huge advocate for peer support and I encourage anyone who had any kind of mental health challenge and feels alone to look for a peer support program or to someone who is a peer supporter. In reality we all are peer supporters and if you can find a way to connect with someone who has experienced depression or even gone through periods of loneliness, etc. it gives you something in common to start talking about. Connection is the key. It's hard as hell to take the first step, believe me, I've been there, and still struggle at times with this, but once you start making those connections and finding that there are other people out there who experience loneliness, etc. just like you, you'll find it's worth having pushed yourself out the door. I wish you well.

You don't mention whether you are in treatment for your depression, or what kind of treatment

I had my first depressive episode about ten years ago and have struggled on and off since. Now I feel truly alone!! The only one I thought I could count on was my boyfriend of 8-1/2 years but he just broke it off. His reasons are: I need to take care of myself better, clean up my house, not be so emotional and apathetic, and follow through on things I say I will do. He was there for me in some of my darkest times but now he can't deal with me or my emotions anymore!! I don't know what to do!!