People Were Dying to Teach Me How to Manage My ADHD

Sometimes strong emotions like embarrassment can give an Adult with ADHD hyperfocus and clarity. Learning to take advantage of that clarity can turn ADHD from a downside into an upside. After all, think of all the opportunities you'll have to beclown yourself in life! 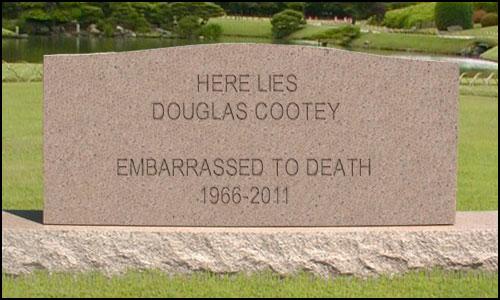 Since becoming single again and moving into a smaller flat, I've been tossing things out left and right, becoming a one man environmental disaster as entire landfills have been exhausted in the wake of my efforts. One can collect a lot of junk over 23 years of marriage, especially if one has ADHD and an aversion to boredom. I had a box for every major gaming system released from 1989 to 2010, complete with dozens of games per system. I had more books than bookshelves to put them on. Nevermind the towering pile of VHS tapes collected each season as I recorded my favorite shows. Even if I was inclined to, I wouldn't have time to watch all those video tapes. What a mess!

While exploring the black hole that was otherwise known as my filing cabinet, I couldn't believe all the useless bits of paper I had filed away as important.

Ah! So glad I held onto those old bank statements from 1996! You never know when the IRS is going to conduct a deep audit back to birth. And that Betty Page photo catalogue from 1992…what on earth was I thinking? Sheesh! Into the landfill it went.

Then I came across a folder labeled "Things To Write To". My eyebrows raised as I realized this was an old collection of letters and forms I had intended to reply to. Most of it was funny, like cereal box offers from 1989 still awaiting a full set of box tops. But then I came across a letter from my Grandmother awaiting my reply.

For a moment I felt 19 years of guilt. Great. Now THERE was an opportunity missed. Fortunately, I do remember contacting her quite a few times before she died, but whatever topic I thought I needed to specifically write to her about was lost eons ago.

It reminds me of the time I finally tried to return some Amiga software I had borrowed from a guy I met. I had meant to return it to him. Honest, I did. After the years passed by, and the mighty Amiga computer was a dodo, I finally found his phone number and gave him a call. His wife answered the phone. It was an awkward phone call, mostly because he had passed away a few years back.

When my Uncle Dominique died before I ever thanked him for the $100 he gave me for college, it was the last straw. Something in me changed and I never made mistakes like that again. Instead of this being yet another case where ADHD taught me how to feel regret, I decided to draw a line in the sand. I started leaving notes for myself, and more importantly, I started following through with them. I started believing that I had no choice but to manage my ADHD or face embarrassment until the day I died.

When people tell me that I don't really have ADHD because I manage my condition without medication, I laugh. They don't live with me. But I do differ from many of them in one key aspect: I believe that I can manage my ADHD if I try hard enough. I don't always succeed, but I'm far better off than the young 20-something boy I used to be who let people die before writing to them.

You don't have to wait for folks to start dying in order to find the drive to take charge of your own mind. You just need to use that ADHD gift, hyperfocus, to give you a push in the right direction. I have often found strong emotions such as humiliation are strong motivators for change. Once motivated, I direct my hyperfocus inwardly and often effect permanent change in my behavior. These days I don't need traumatic events to trigger this inward hyperfocus. But it took practice.

Then again, you should have seen how motivated to change I became after my wife of 23 years dumped me. Talk about clarity of vision! I'm almost like a new man these days.

How about you? Have you found clarity after experiencing an embarrassing or traumatic event? Were you able to direct that clarity inwardly to effect change? Have you learned how to summon that type of clarity without having the trauma of embarrassment?

APA Reference
Cootey, D. (2011, October 6). People Were Dying to Teach Me How to Manage My ADHD, HealthyPlace. Retrieved on 2023, February 5 from https://www.healthyplace.com/blogs/adultadhd/2011/10/people-were-dying-to-teach-me-how-to-manage-my-adhd

Hi Douglas I think any person who feels the need to comment on your ADHD who does not live it has no right to make that comment. I constantly have people (and I know mostly their intentions are good) telling me to try this go to Reiki, see a naturopath, try this therapy. It does tend to get somewhat insulting. Don't they realise we have explored all avenues for our son. It is not like we sat around twiddling our thumbs going woe is me.
Thanks for the honest account.
Laura