The role of gender in Internet addiction

Briefly, gender influences the types of applications and underlying reasons for Internet addiction. Men tend to seek out dominance and sexual fantasy online, while women seek out close friendships, romantic partners, and prefer anonymous communication in which to hide their appearance. It seems to be a natural conclusion that attributes of gender played out in Cyberspace parallel the stereotypes men and women have in our society.

Men more than women seemed to enjoy interactive on-line games which draw upon power and dominance. These on-line games differ from video games in that characters interact with one another allowing all the players to recognize each other's rank. A character's rank is formed as a player gains more strength and power through continued play time. Characters' holding top level ranks earn recognition and respect from other players. Not only is status achieved through these games, but more often men seek to dominant other players as characters have the power to blow up, stab, shoot, and kill other players in a game. Men seem to enjoy the aspects of violence and dominance in such interactive games.

Cybersex is another area men seemed more attracted to than women. To give a brief background on how Cybersex is achieved, let me explain more about the types through chat areas which exist on-line. The development of social interaction of virtual chat rooms allows people to converse with one another about a variety of topics. Some chat rooms are very sedate and dedicated exclusively to a particular topic such as sports, the stock market, or travel. In other cases, theme rooms become highly sexual and one enters such a room with that understanding as there is little way to misinterpret room titles such as "SubM4F" "HungBlM4F" or "MarriedM4Affair." While men and women alike enter such rooms exclusively looking for erotic chat, predominantly men remarked how addictive such sexual entertainment was to them. Married and single men alike discussed in great detail why Cybersex was so thrilling to them. The addiction grows from the ability to cruise such chat rooms looking for uninhibited Cybersex - things they would never do or say with their wives! One man commented, "I love my wife and I respect her too much to ever say such humiliating things to her. But on-line, there are Cybersluts - women just wanting sex. They don't mind and even encourage me to use them in a sluttish way. So, these women draw it out of me." Men also enjoyed the ability to download available and easily accessible Cyberporn. X-rated Web pages provide quick access to adult photos, moving video clips, 900 phone numbers of available women complete with photo and sound clippings, and catalogs of foreign women for marriage. In general, men were more openly drawn to the sexually explicit material accessible through the Internet.

Women more often than men commented on how they sought out support, acceptance, and comfort through on-line relationships formed in chat rooms. Virtual communities gave women a sense of belonging and the ability to share the company of others in a non-threatening environment. Like Cindy, a graphic arts designer from Denver told me "I love the idea that I was able to make such close friends on-line. These people offered me so much strength, especially when I started my diet. When I was struggling to stay on it (the diet), I jumped on-line and asked for help. So many of my on-line friends were there to help me - it was so encouraging."

As men tended to look more for Cybersex, women tended to look more for romance in Cyberspace. In virtual chat areas such as "Romance Connection" "Sweettalk" or "Candlelight Affair" a woman can meet men to form intimate relationships. But like a soap opera, tender moments with a romantic stranger can lead to passion and progress into sexual dialogue. I should note that it is not unusual for women to engage in random Cybersex, but many times they preferred to form some type of relationship prior to sexual chat.

Women more than men enjoyed the ability to hide their appearance from others through anonymous electronic communication. The emphasis in American culture for women to be slim, blonde, and proportionate makes women who don't fit these characteristics feel unattractive and fear rejection from men based solely on their appearance. However, through anonymous on-line communication, women have the chance to meet men without having to be seen and judged. On-line, women can be overweight or just having a "bad hair" day and not feel awkward about their appearance. Conversely, attractive women also enjoy the benefit of meeting men without being judged as a "piece of ass." As one woman put it, "Guys get to know me for me, and they don't just think of me just as a woman to get into bed." For many attractive women who get hit upon in real life, the ability to anonymously interact with men makes them feel as if they are appreciated for their minds and not their bodies.

To learn more about gender differences, read Caught in the Net, as it outlines specific cases of how men and women differ when using the Internet.

next: Has Your Relationship Been Hurt By A Cyberaffair?
~ all center for online addiction articles
~ all articles on addictions

Are You Addicted to Cybersex?
Cybersex and Infidelity Online: Implications for Evaluation and Treatment 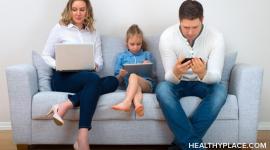 The Effect of Familial Trauma on Children