"Honestly, as far as I know, I'm the only gay virgin in Buffalo," says Michael Empric, 24, who does public relations for the American Red Cross, drinks skim milk, doesn't smoke, loves TiVo and going to the gym, and was chosen as Gay.com's "Hottie of the Day" this past February. Empric dated women before he started coming out during his senior year of college, but he didn't have sex with them. "I never made the connection between the strong feelings I had for men and actually being gay," he says. That is, until he did an inventory of his enthusiasms and started doing the math. "I was like, 'Duh. I like shopping, and watching The Golden Girls. There's a pattern here.'"

The pattern of cultural passions that helped Empric come to understand that he is gay doesn't make him particularly unusual. Gay men and lesbians have used Bea Arthur, Barney's sales, mullet haircuts, and U-Haul trucks as touchstones of sexual identity for decades. But for gay people in previous generations, mastery of this pattern has generally been a by-product of sexual experience, a postcoital code learned in order to mark oneself as a member of the tribe. The reason they learned the code wasn't primarily to take on a gay or lesbian identity; it was to meet people with whom to have sex.

Recently, however, much of America has become increasingly fluent in gay culture, and that's helped a new generation of gay men and lesbians to come out and, in some cases, spend years developing a highly articulated gay identity--without having sex. This, of course, raises a couple questions: How do you know you're gay if you haven't had sex? And what constitutes virginity for gay people? In other words, is a gay man a virgin if he's had only oral sex? Is a lesbian a virgin if her hymen is intact?

Don't expect women to simplify things. The classic physiological sign of women's virginity--an intact hymen--was rendered absurd by Title IX, which increased athletic opportunities for females. Countless girls--and women--have since lost it in the heat of a soccer match or on a particularly intense bike ride. And many lesbians consider the hymen to be utterly irrelevant to virginity, says Jim Maynard, who runs the GLBT Helpline and the Peer Listening Line at Fenway Community Health Center in Boston. To his knowledge, no lesbian has ever mentioned a hymen when calling the helpline's counselors to discuss the loss of her virginity. "It's passe," he says.

Going further, many would argue that the term "virginity" itself is useless to gay people. A spokesperson for the Los Angeles Gay and Lesbian Center says no one on his medical or mental health staff has anything to say on the topic: "It's not a subject that has really come up for us." The center's executive director, Lorri Jean, adds, "I don't think that most people's gay identity is based on the sexual act. We are what we are, whether we're doing it or not."

Still, some lesbians and gay men believe they've successfully adapted the term to their own experiences. And they're practically unanimous in their decision to use "virginity" as a figurative description of isolation, the disappearance of which occurs when true intimacy is found.

Danyelle Thompson, 23, a senior at the University of Wisconsin at Oshkosh, says she came out five years before she lost her lesbian virginity, which she did a few months ago--an event she describes as "doing the most intimate thing that I could do with another person. For me personally, I felt that that was oral sex." Her bisexual girlfriend, Jes, 21, also a student at Oshkosh, says that when she first slept with a man, she believed she had lost her virginity. But her first same-sex sexual experience, with Danyelle, forced her to rethink virginity's definition. "I think losing it happens in some kind of episode or experience that's deeply intimate," she says. "I know it when I feel it."

Meanwhile, in Buffalo, Michael Empric is still waiting, for reasons that are perfectly clear to him. "I think many gay people seek happiness through relationships and having sex," he says. "I wanted to figure out who I was outside the context of a relationship, and being a virgin has forced me to become comfortable with myself."

He says most guys he meets respect his decision. "The number 1 thing guys say to me is, 'I really wish I had waited, and I respect what you're doing.' That's a good thing for me to hear, because sometimes you doubt yourself, like this is not what I should be doing. So much of the gay culture is focused on sex. To not be like that is tough sometimes. I hate to say it, but it's tough being an individual."

Ask him if he's looking forward to the day when those doubts are gone, and you can practically see the comic book balloons--Zounds! Barn! Boom!--go off in his heart. "Oh, of course! Absolutely! Without a doubt," he says. "It's definitely not like an 'I'm scared' thing or a nervous thing. Absolutely, I'm eagerly anticipating that day." Sooner or later, some guy will make the earth move for Empric, but until then he's happy being gay in a way that, to him, is no less sexual for being lexical. 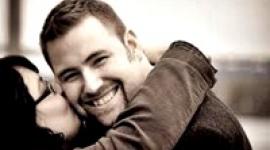 Does Sex Make Us Happy?

Understanding Human Ambivalence About Sex: The Effects of Stripping Sex of Meaning

Prozac: Side Effects for Women

Sex: It's Different for Girls