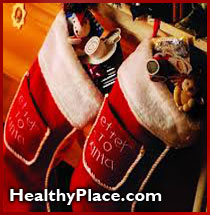 Christmas came and went and was nice, in that I spent it with my Mum and Dad and that was lovely. I was there for 3 weeks and had a great visit with them! However, on the downside, it was as upsetting and emotional as I had feared it would be and I certainly shed more than a few tears!

I missed Phil immensely and the one consolation was that I did receive a couple of text messages from him, which showed a lot of emotion and feeling in him too and gave me the impression that he wasn't able to experience Christmas in his "new" life without lots of thoughts of me and him and our relationship. This was comforting in a way, but sad as well. It showed there are definately a lot of strong feelings and emotions all mixed up for both of us and maybe as a friend suggested, we need to meet and talk.

Having said that, since Christmas I haven't heard anything from him!! He is probably trying to run away from those feelings now and pretending to himself that he didn't have them!

My OCD is on a steady road, it's not better or worse but about the same.

Last Christmas, I had a euphoric feeling. If you remember, Phil was talking about not being able to remain with me if the OCD was still going to dictate everything in our life. This had scared me to such an extent that it had overpowered the OCD symptoms and for a few days, I felt almost completely free from it. It was as though I was walking on air and a great weight had been lifted off me.

Now, I am so thankful that I was able to have those feelings and be able to experience, if only for a short time, what life could feel like without the OCD. I no longer have that complete freedom from it (although it is under some control and enourmously better than it was)! I realise now that it was a temporary thing that came from me having a greater threat in my life and a greater fear! Maybe if it had achieved its objective, it would have lasted!

I said to someone today that unless they had OCD themselves they couldn't understand what it feels like to have it. My friend said that he could have a general understanding, but agreed he couldn't have a sense of what it actually feels like to have it. I think that's true, just as I can understand how it must feel to be scared of heights or spiders or something but I obviously can't have the exact feeling of what it must be like for that person dealing with that.

On the outside, to people, I may seem perfectly alright and able to handle life on a day-to-day basis pretty well, but they don't feel what I do. They don't know the torment that goes on in my head all the time and feel the constant invisible and irrational threat that I feel from the OCD's powerful symptoms. They don't realise that on any given day, I could leave the house and go out somewhere looking forward to something and be excited about it, and an hour later be returning with a deep sense of fear and dread in me because "something" had sparked off a huge OCD fear and worry in my head that was racing out of control and completely taking over all my other feelings and thoughts.

I greatly admire anyone with seriously impairing OCD who has to cope with a job everyday and/or family responsibilities. The amount of control and strength it must take to be able to deal with all of that plus the OCD must be huge! I guess, as I did for awhile, you just do. You just somehow manage to cope, until perhaps at some point you can't anymore and something gives.

In my case, I totally broke down and was physically and mentally unable to function anymore. I remember that day clearly. Phil was driving me to work and I just broke down into uncontrollable sobs and was a total wreck.

I am happy to be able to look back on that now and see I have come through some really awful times with this illness and to have a feeling that at the moment it is being controlled to some degree. And who knows, maybe one day I will get to feel that euphoria again; that complete sense of the OCD having left me. Only this time, maybe it will last and I won't have to lose something else precious in my life to feel it!!

Happy New Year everyone! Here's to that freedom ! lol

Bye bye till next month, Love and hugs, ~Sani~. xx

How to Stop OCD: Overcoming and Dealing with OCD