Remembering the Forgotten: Your Response to Dementia

When I wrote the article ‘Eliminating the Word Schizophrenic’ I stated that schizophrenia was the most stigmatized of all the mental illnesses. Somehow, I forgot to consider dementia as the stigma that it bears runs much deeper than schizophrenia, bipolar disorder and depression combined.

Almost everyone knows an older member of their family who ‘lost their marbles’ and lives in supportive housing. It’s a family secret in thousands of families. It’s an illness that due to its difficult presentation, makes people fearful of it. And when people are fearful of something, they avoid it.

Do You Know Someone who Suffers?

Think about your life. Is there someone you know who suffers from dementia that you have neglected to visit as much as you once did? Do you have an aunt, uncle, grandmother, grandfather who spends their days in a lonely mental health facility doing the same puzzles over and over again? 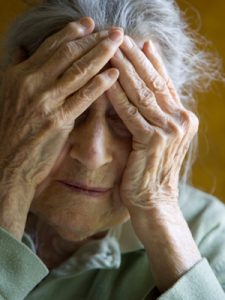 Rationally, I can understand why there is a tendency to further ourselves from a loved one with dementia. It is one of the most difficult things to bare when a loved one no longer remembers your name. Or even worse, if they become violent and disconnected from the rest of the world.

But just because it makes you uncomfortable, it does not give you the right to deny these people the love and support they deserve, at the time they need it most.

Most of the residents on the ward did not remember me day to day. I was often confused for a son or a grandson. Many of them were violent towards me, to no fault of their own. But every single day, no matter how distraught and confused a person was, I could make a small, positive difference in their day. Sure, they may not remember that moment five minutes later, but it doesn't take away the importance of having that moment.

All I'm trying to say is that just because your loved one is disconnected from reality, it doesn't mean that they can no longer experience joy. Even if you think your visits are no longer helping, keep going.

Mental stimulation has been proven to slow down the degenerative nature of the illness. At this point in modern medicine, its effects can’t be reversed but they can be managed. By simply visiting more often and engaging in loving conversation, you are increasing their chances of having more good days than bad.

Cognitive Distortions and Self-Stigma
What Does Standing Up for Mental Health Really Mean?
Elaine
January, 29 2013 at 12:34 am

I had the added distress (MINE) that my mother refused to leave Zimbabwe (her grandfather was born in Namibia, my children in Zim) but we had to leave for their sakes. Then the loss of memory and dementia set in.
To this article I would add that visiting, writing to and phoning are all worth while for the loved one, and also for the giver who will feel better for doing so and nt carry regrets forever after.

Hi Chris:
Thank you for this post. You posed a thought provoking statement when you said "...just because your loved one is disconnected from reality, it doesn’t mean that they can no longer experience joy."
This is something to think about. My great grandmother had Alzheimer's Disease many years before she died, and although I was a young child, I remember her extreme disconnect from the world. Her emotions were also disconnected but there were times when she expressed emotions I didn't think she could. Some days she was happy or angry, while other days she was quite content. Were these emotions true? Perhaps, perhaps not.
What science has yet to answer is whether or not these emotions are actual feelings and not representative of a disconnected mind that doesn't really feel that emotion, although it is being expressed. My question has been: "Can someone with severe forms of Dementia or Alzheimer's Disease actually experience emotion? If someone with severe forms of these diseases express anger to someone they once loved dearly, does that mean that person is actually angry? Emotion is hard to study because it's so abstract.
However, somewhere deep down I believe there are certain cases where a loved one can sense the absence of their family when they are no longer visited. Somehow visitation seems to keep that person "alive." In some ways, it appears their soul is still holding on and connected, even though their mind is not.
We have so much still to learn about these diseases. I appreciate your encouragement for individuals to embrace their loved one.
Take care