One of the consolations of age is the transformation of one's relationship with time. As a young man, I agonized endlessly about the future, speculating and puzzling over a never-ending succession of questions. Would it arrive on time? Would there be enough of it to go around? Would it be in color? Would it be three-dimensional? Would it have sufficient volume to fill the allotted amount of space?

Only later did I come to understand one of the great truths about time. The future is an immutable constant, it is always the same; the past, by contrast, never settles down. And so I began to focus my energies on predicting the past, an enterprise that turned out to be far more difficult than I had imagined. 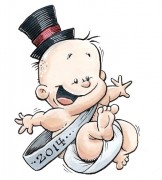 Increasing familiarization with history gave me ammunition as I cast my eyes upon the future. Indeed, from today's vantage point, the future and past are virtually indistinguishable; one might swap their locations and never arouse suspicion. For those of us with mental health issues who struggle to make sense of a world which, quite frankly, is itself struggling to make sense, it is the present, which is to say, now, that provides the real mystery.

Let me demonstrate what I'm about to say by making no reference at all to what I have just said. As gypsy fortunetellers have known for centuries, predicting the future is not difficult if one is familiar with the dimly lit labyrinth commonly referred to as human nature. Throughout the passing cavalcade of centuries, technology has changed, fashion has changed, but the human character has not. With this in mind, here are two Funny in the Head fearless predictions for 2014.

Somewhere in America a troubled teenager will attack an authority figure with a banana. The authority figure will sustain life-threatening injuries and look sympathetic on TV. Spokesmen for the banana industry will express shock and dismay that their product could be misused so horribly. Sympathetic bumper stickers will appear almost overnight sporting slogans like, “Bananas don't kill people, messed up people kill people".

Somewhere in Los Angeles an actor riding out the ragged end of a mediocre career will find himself desperately in need of free publicity. Despondent and at the end of his rope he will descend into the obligatory vortex of alcohol, drugs, promiscuity, late-night abusive phone calls, and disrespectful comments about Steven Spielberg. This tawdry behavior will land him face first on the tabloids where he will blame his reckless irresponsibility not on himself or his own failings but on some mental disorder with which he has but a passing familiarity. Indeed, he will be lucky to spell it correctly. The press will pay attention and the public will pour forth enough sympathy to secure him one gig, most likely an infomercial.

I'm pretty sure about both of these; although to be fair they might have already happened.

APA Reference
McHarg, A. (2014, January 17). Fearless Mental Health Predictions For 2014, HealthyPlace. Retrieved on 2021, May 6 from https://www.healthyplace.com/blogs/funnyinthehead/2014/01/fearless-mental-health-predictions-for-2014

I think you have, with your usual obscure profundity, stumbled upon a great truth: predicting the future is EASY. Anyone can do it. Some people even get paid for it, which is outrageous. By the time the future arrives, no one's really interested in the predictions because we have NEW predictions to tend to - these professional predictor make sure it. "Watch out! We'll have MORE future arriving any moment!" Scary, and it's one of the great scams.
No, the real challenge is predicting the past. Few people can really do this, for if you aren't spot on, you're obviously an idiot. Admittedly, this may have already been obvious, but if it wasn't, it sure will be, should you attempt this, at some point in the future.
Now, I hope that's sufficiently clear that we won't have any more of this nonsense.

Yes, Tom, crystal clear, thank you; at least it was a minute ago!

Hi Alistair :) Predicting the past, I like it! As for doing it, you're right, it's not as easy as it would seem to be. I predict that there will be ongoing negotiations by the film industry to promote the stoppage of colorizing "The Wizard of Oz". They will be unsuccessful. I also predict that there will be an increased usage of duct tape and gum to repair bridges and other infrastructure in 2004. Lastly,I predict there will a blizzard in Buffalo in 1977, and that the Weather Channel will show film of it every time there is a storm going on in Buffalo. It's rather annoying, they must have newer film somewhere. Perhaps proverbially unemployed actor Stanley J. Hudson (former alcoholic and addictive hot chocolate drinker) can be a spokesman for Buffalo and its infrequent blizzards. He used to appear in films made to promote loss prevention in various businesses. He also appeared in the frightening thriller "Home Alone with Chuckie and Austin Powers" It's about a maniacal doll who does his best to stop the creation of any more Austin Powers movies. Best of luck with your predictions!

Hi Cindy: You seem to have a gift for predicting the past; I hope you'll keep it up so we can see what happened.