Shrink-Rapping: When The Doctor Is Out, Way Out

Let me preface this by saying that I’m a strong advocate of what is called “talk therapy”, whether conducted with a psychiatrist or psychologist. Today’s mental health care community likes to throw pills at problems because insurance companies prefer it that way – for obvious reasons - but real mental health recovery occurs over time as the result of a careful blend of professional guidance, pharmacology, and personal will, labor, and fearless commitment.

Talk therapy, when done properly, is the greatest emotional and spiritual adventure anyone could ever embark on. Compared to talk therapy, the much-discussed boating expedition of Columbus was simply a hop, skip and a splash down to the corner newsstand for a pack of smokes. But, it is dangerous and scary, and only works if the traveler is in the hands of a skilled guide. 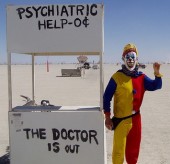 What this means to you is that the selection of a therapist or psychiatrist is unlike any other consumer decision you will ever make. You should be assertive. Patient/Whackadoomian is a very weird power dynamic and patients are quick to turn over all decision making to the healthcare provider. Mistake. Make your choice deliberately, and don’t be shy about “trading up” if things get weird or simply unproductive.

In the mental health community there is an old bromide that states; psychiatrists are every bit as crazy as their patients. This observation is viewed as odd, surprising, and above all, ironic, since they are in charge of leading the mad back to sanity.

But when you dig a little deeper it all makes sense, in an odd sort of way. To begin with, most therapists, psychologists, and psychiatrists entered the field for selfish reasons; they had a personal demon in need of taming. The process of dealing with it hooked them on the mystery itself, and then, the application of learned skills for the benefit of others.

So, yes, they’re often a bit off center to start with, and a career of working with Whackadoomians all day every day doesn’t exactly make them less unusual over time. However, and this is the main consideration, being twisted as a slinky does not necessarily disqualify them from being able to help you.

Over my long and storied career as a Whackadoomian I saw several psychiatrists and psychologists but there was one I worked with closely for many, many years. He is largely responsible for creating the paragon of sanity you have before you now. Let’s call him Chumley Incubator Frampton; Ph.D. Dr. Frampton was very, very clever. He’d gotten his degree from a university that rhymes with Shmarvard. He wore tweed jackets with patches, bow ties and buttoned-down oxford shirts. We got along famously and I made tremendous headway.

After about five years of regular sessions he surprised me one day with this odd revelation.

“Alistair,” he said, “the time has come for me to tell you about my mother. My mother was a musical prodigy, a concert pianist who traveled all over the world giving recitals. The CIA recruited her as a spy because she could move at will, even behind the iron curtain.

One day my father found her hanging by the neck from a ceiling fan in our kitchen. She was dead. There was a suicide note but the handwriting looked faked. We were both convinced the CIA did it because she knew too much.” His face betrayed no emotion of any kind.

Then I thought, I’ve invested five years in this guy, he’s been doing a good job…

APA Reference
McHarg, A. (2012, October 24). Shrink-Rapping: When The Doctor Is Out, Way Out, HealthyPlace. Retrieved on 2023, January 30 from https://www.healthyplace.com/blogs/funnyinthehead/2012/10/shrink-rapping-when-the-doctor-is-out-way-out

I wonder how things would have gone in that conversation if you had said to your PDoc, "Im upset for you and the way you lost your Mom, but your delivery of the story really doesn't seem to capture the emotion it must have evoked in you!"
:-) hehee

I love your story, and I am glad you got the help you needed no matter who it came from. I have given up on psychiatrists and psychologists now too many bad experiences, but most were just poorly educated in mental healthcare rather then I saw their human weirdness (i am great with weirdness). One example was a psychiatrist who kept changing my meds every week even though my GP said the meds they put me on took a month to have effect. Despite 11 years of different psychiatrists none picked up on my need to be assessed for high functioning female Aspergers lol. I love your phrases like "Whackadoomian" as it doesn't seem stigmatising to me.
Its great to have a laugh and admit we are all human.

I have unfortunately seen enough psychiatrists to have a lot of horror stories. But the best was the psychiatrist who told me on my first visit that I reminded him of his wife. I wasn't sure how to take this. But it turned out he was in the middle of an extremely nasty divorce and he proceeded to have a psychotic break over the next few months, along with medicating me into one as well.

Hello Emily: Thanks for writing. Yours is a scary story, I trust you emerged from this entanglement intact. - There is so much vulnerability built into the dynamic - even though it can be tough - caveat emptor! Patients must feel empowered to question decisions they don't like.

Great article I smiled and wondered at the same time if this could be real. Thanks.

Hi David: Thanks for reading - and especially for writing! It is absolutely true, I was stunned when it happened and made my reply as oblique as I could. The odd thing is, I continued to see him for years afterwards. He was a brilliant guy and a great therapist - but - like all of us - human.

I agree, they do do God's work! Joe and I are very lucky to have and appreciate the pdocs that we have right now.

Theirs is a very unusual skill. It's a little bit like acting - when it's done really well - you never notice it at all - but you feel it.

Hi Alistair :)"Twisted as a Slinky", I love it! My husband Joe, had a change of psychiatrist when his regular one moved out of state. The first appointment was a disaster. We came into the small waiting room and music was BLARING,so we asked why. They said it was to prevent us from hearing what the new psychiatrist was saying to his patients,(Oh boy, this is not good). I can't imagine that the patients heard anything but the music either. The appointment wasn't so good either-the doc hadn't read his chart, he couldn't find it (okay, this definitely isn't good). The twisted slinky describes that session perfectly...got a new pdoc pretty quick. Have a good week. Cindy

Hi Cindy: I hope this one isn't too dark. It's a true story. Psychiatrists and psychologists can be an odd lot, but they do God's work, and I, for one, am very grateful for their contributions.