Grateful To Be Imperfectly Awful

For reasons we might want to explore at some other time, I spent over 30 years toiling in the corporate vineyards as an advertising copywriter - an occupation which enjoys a level of social prestige roughly equivalent to that of garbage collector, lawyer, and snake oil salesmen - although to be sure - the latter group is begrudgingly afforded a modicum of respect since almost everyone abhors a squeaky snake. I know I do.

But I digress. Writers, as you know, are a disreputable lot. As a rule they live in culverts, subsist on scraps of food left by others in greasy spoon diners on the outskirts of town, frequently showing up for work with three days of stubble, pockets crammed with losing lottery tickets, reeking of bourbon and cheap cigars. The men are even worse!

As a bipolar dipsomaniac with a chronic attitude problem that includes contempt for authority, you can imagine I lost and found and lost employers the way others misplace car keys. Some jobs were submerged deep within the bowels of soul-less corporations shamelessly exploiting the witless populace, while others resided in neurosis factories referred to as advertising agencies where paranoia, throat slitting, and British wardrobes were passed off as creativity. 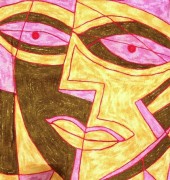 One commonality of all these dreadful coal mines was the professional category known as “artist” which, in this case, means “graphic designer” which then meant person in charge of taking words, setting them in type, and embedding the result in a breezy assemblage of photographs, colorful shapes, and visual irrelevance thought to aid the sales process we served, striving evermore valiantly to separate the unsuspecting from their treasure.

Artists - graphic designers - are almost the antithesis of writers. As a rule, they are cheerful women who bring an ideal suite of qualities to their task - wonderful sense of color and design, ebullience, responsibility, method, quiet productivity, and an almost depressingly relentless optimism. Meet charity Vanderbilt.

Charity Vanderbilt invariably looked as though she had been peeled from the pages of a clothing catalog. Her attire was not flashy, it was impeccable, precise, tight, ratcheted down with control as rigid as any painting by Pete Mondrian. Just 5 feet tall dripping wet, (why she insisted on having her height measured after showering I cannot tell you), she had a singsong high-pitched voice that resembled a Warner Brothers cartoon character far more closely than a person. Charity walked with quick, short steps as though a string between her ankles dictated the precise length of every stride.

One day, Charity revealed something I found completely stunning. She said that the gas gauge in her Volvo had broken and she left it that way on purpose because she “enjoyed the mystery and excitement of not knowing if she was about to run out of gas.”

I thought of my own life, a cavalcade of catastrophes including prison, mental hospitals, manic depression, alcoholism, divorce, lost jobs, small fortunes washed away with the dirty dishes - I thought of how I was trying to out-run my curse and find order, stability, responsibility, even some peace of mind.

Then I thought of Charity Vanderbilt, whimsically setting a little booby trap for herself, to make her life a tiny bit disorderly, a tiny bit surprising, a tiny bit interesting.

I hope, on Thanksgiving, you find gratitude in the blessing of imperfection.

APA Reference
McHarg, A. (2013, November 25). Grateful To Be Imperfectly Awful, HealthyPlace. Retrieved on 2021, May 7 from https://www.healthyplace.com/blogs/funnyinthehead/2013/11/grateful-to-be-imperfectly-awful

When It Comes To Thanks Giving, Enough Is Never Enough
Claus For Alarm, What Santa Insanity Says About Us
cindyaka
November, 29 2013 at 5:38 am

Hi Alstair! Wishing you a belated Happy Thanksgiving. God bless you in working in advertising, I always said I would never work in that industry. I also never had a desire to work in the traffic department at a radio station, too much stress in both. Now I work at a school, different kind of stress, but doing well. All the best to you and yours. :)

Always good to hear from you, Cindy - cheers!

You are such a dynamic writer! I'm going to use this for my patients!!! I agree with you totally! It's all about perspective!!

Thanks for the nice words, Diane. I think that all of us who live with mental illness are forced to develop perspective in a way that square pegs never are; in the long run this gives us a tremendous edge. I hope you enjoy your holidays.