Most professions develop technical jargon so rarified as to be virtually incomprehensible to outsiders. However, their impenetrability is simply an unintended consequence of the function served. Other enterprises deliberately employ coded slang so that insiders can secretly communicate with one another in the presence of clueless outsiders.

Many of you are familiar with “Cockney rhyming slang” – an amusing grab bag of odd phrases used by English shopkeepers when they want to discuss matters of concern in the presence of customers without letting on what they’re saying. Entertaining snippets include “plates of meat” for “feet” – “trouble and strife” for “wife” - and “boils and blisters” for “sister”. I know what you’re thinking, something like that could never happen in the United States where people are direct, open, and honest all the time. 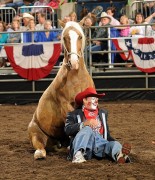 Sparky, you are in for a rude awakening because talking in code is happening all around us every day, even in places where one would least expect it! Yes, even in that temple of honesty known as the psychiatrist’s office! Indeed, every day across this great land of ours psychiatrists speak code to one another in the presence of patients and family members so as to not reveal important, and potentially upsetting, information. As luck would have it I have learned many of these “Shrink-Rap” phrases, and most importantly, their secret meanings.

Here are a few examples. If you’ve ever heard your psychiatrist use any of them, now you know what he meant.

Rufus The Rodeo Clown – Patient who hides self-destructive tendencies behind a disingenuous, off-putting veneer of good cheer and insouciance.

Moth-Pocket – Individual with no health insurance.

Chubby Bunny With A Biscuit – Patient anxious to discuss a newly discovered neurosis.

Clam Somnambulist – Last patient was so tedious, drab, and tiresome he could have put a clam to sleep.

P.J. Octopus – A patient who belligerently resists acknowledging a diagnosis, squirming harder and harder as realization approaches; the way an octopus might resist when parents attempt to slide its various legs into a pair of octopus pajamas.

Asp Burglar Sitcom – Patient exhibiting rude, aggressive, and socially intolerable behavior which he attributes to Asperger’s Syndrome, even though he does not suffer from this illness.

Cairo Bungalow – Patient who spends so much time in denial he should get a second home in Egypt.

There are others! So remember, things aren’t always what they appear to be, not even at the shrink’s!

If Mental Illnesses Had To Recruit
In Search Of A Global Context For Mental Illness
best Way to get ex back
April, 9 2013 at 5:19 am

You ought to be a part of a contest for one of the most useful websites on the net.
I most certainly will highly recommend this web site!

Thanks for your very nice words! Yes, certainly, Healthy Place is one of the most useful websites on the net - whether my humor column qualifies as useful is another story.

Hi Alistair! I like the Cairo Bungalow, it's a great place to relax once in a great while. Occlusional Bunny with a Biscuit-a bunny who complains that he has overgrown molars to go along with his new neurosis. Great to be back reading again!

I agree. Good for a visit; bad place to live.