Random Sanity Checkpoints Should Curb The Scourge Of “DWI”

"Driving with your eyes closed doesn't actually make you invisible; but it might as well." Taz Mopula

It is widely understood that, to legally operate an automobile in the United States, one must possess a valid driver’s license. It is further understood that driving a car is considered a privilege which can be revoked at any time for various reasons. The individual who drives while intoxicated is considered a menace to himself and society so, to protect the general welfare, police officers are entitled to stop automobiles and administer field sobriety tests. Some jurisdictions even set up Field Sobriety Checkpoints. Inebriated drivers caught in these snares are severely punished, and drunk driving decreases as a result.

Well and good, you say, but what’s being done about the equally chilling danger of DWI – Driving While Insane? Sadly, the answer is - not much! But that is all about to change thanks to the imminent introduction of Random Sanity Testing and Sanity Testing Checkpoints! 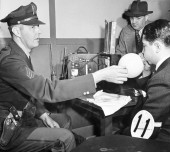 Get Ready To Prove Your Sanity Anytime Anywhere

If you’ve ever been stopped for driving under the influence most likely you’ve been given a field sobriety test combining rudimentary questions and deceptively simple physical tasks. Fail this and you’re primed for a breath test able to determine the amount of alcohol in your bloodstream.

Obviously, determining sanity is much more difficult than determining inebriation, so, an ad hoc committee consisting of representatives from a broad range of disciplines including theology, philosophy, healthcare, business and law enforcement was assembled to develop a simple, universally applicable Field Sanity Test.

Here are the questions officers will ask, and directions they’ll follow to interpret responses.

1. Do I know what you think you’re being stopped for?
(Note to officer: If answer is “Yes” - Fail. Paranoia.)

2. Does everyone, everywhere care about you being stopped?
(Note to officer: If answer is “Yes” - Fail. Narcissism.)

3. Were you driving erratically so I would stop you to see if there was something wrong with your car?
(Note to officer: If answer is “Yes” - Fail. Munchausen By Proxy.)

4. What do you think your chances are of passing the test I’m about to give you?
(Note to officer: If respondent gives you odds - Fail. Compulsive gambler.)

5. Have you noticed I’m naked underneath these clothes?
(Note to officer: If respondent smirks lasciviously - Fail. Sex addict.)

6. Is this dreadful, intimidating moment an oddly cheering affirmation of the inherent wretchedness of existence?
(Note to officer: If answer is “Yes” - Fail. Clinical depression.)

7. Am I about to meet the greatest…worst person in the entire universe?
(Note to officer: If answer is “Yes” to both - Fail. Rapid cycling Bipolar disorder.)

Random Sanity Checkpoints are just around the corner; all that energy you’ve been devoting to mental health is about to pay off!

APA Reference
McHarg, A. (2011, October 11). Random Sanity Checkpoints Should Curb The Scourge Of “DWI”, HealthyPlace. Retrieved on 2023, February 3 from https://www.healthyplace.com/blogs/funnyinthehead/2011/10/random-sanity-checkpoints-should-curb-the-scourge-of-dwi

Thanks Alistair. This helped me start my morning with a smile. : )

Hi Jon: Thanks for visiting, and for writing! Sorry it took me so long to get back to you but I was stopped at a Random Sanity Checkpoint on the way to work this morning and I was feeling a little insane - took a while to convince the officer I had all my marbles.