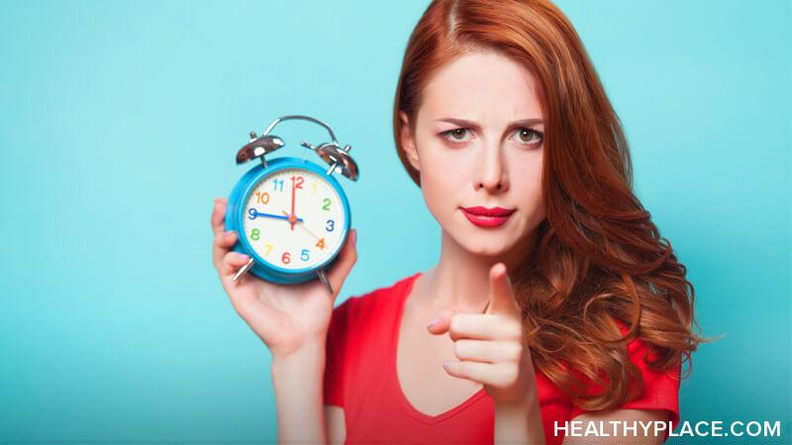 Is it really true that it is better to be late than to never arrive? In my experience with ADHD and tardiness, I'd have to disagree. I say it's better to never arrive and claim some horrible calamity had befallen you than to arrive late. They're more likely to forgive you.

I find it puzzling that the diagnosing ADHD in adults, there's no mention tardiness. Could I honestly be the only ADHD adult on the planet who is later than a August 15th income tax filing on a regular basis? Preposterous! Google shows 223,000 results for "ADHD tardiness". How could anyone miss "chronic tardiness" as a criteria for ADHD?

Could Tardiness Be A Symptom of ADHD?

Perhaps they felt that tardiness is a symptom of the other hallmark ADHD attributes. Certainly, impulsivity, hyperfocus, and distraction factor into tardiness. Don't forget to throw in an intolerance for boredom. Tell me to arrive 20 minutes early and watch me break out in a sweat. 20 minutes? What will I do during all that time?

It certainly doesn't help that I have created a lifestyle around the last minute. I remember once in college, I was busy working on a deadline for a comic strip when I realized I needed something to complete my work. It was 5:50pm and the college bookstore closed in 10 minutes. I bolted out of my apartment, whizzed across town like a deranged lunatic, and ran at dangerous speeds through people to get to the bookstore. The bookstore was separated from a convenience store by a metal gate which was mere feet away from closing the store for the night. Without breaking my step, I ran at the gate and slid under it.

Despite the stunned look on the gate keeper's face, I got into the department I needed and bought my item. Whatever it was. Can't remember. But I remember how pleased I was with myself. But for every slide in the nick of time, there are other mishaps where I crash against the gate in a horrible, humiliating jumble.

The root of ADHD tardiness is either distraction or an intolerance for boredom. Distraction speaks for itself, but boredom might need more explaining.

So adverse are most ADHD adults to boredom that we try to fit four into three in the small amount of time we have. Although not all adults with ADHD have this problem, many do, and they can't stand to think of an idle moment. That's why they cram every minute with activity, often overestimating the amount of time they have. In the ADHD mind, being bored is often worse than being tardy.

This will take some training.

With effort and practice, you will get punctuality under your belt—much like a kid who finally learns to ride a bike in his 40s. Good luck.

I have ADHD and yes, I too suffer from tardiness, have my whole entire life. My tardiness has gotten worse and worse the older I get. Its to the point now that it's destroying my life. I am so easily destracted and terrible at estimating how long it will take me to finish a task. I know the reason's that I am late, I just can't seem to control it. It may take me 20min to get ready one day, then 4hrs the next. This makes it almost impossible to estimate how long it will take me, just depends on how many and for how long I am distracted. I have been to the Dr. and cried begging for help and the psychaistrist as well. They try to help me find a soloution but with no sucess! I cry all the time about it because it has made everyone I know and love tired of dealing with me, I cant tell you how often I get lectured or told the they cant count on me for anything. Not to mention the jokes and teasing that goes on constantly, by anyone and everyone for so many years now I have listened to the same ones over and ove, and unfortunately I do not find it funny! Another problem is that a lot of my distraction is going on inside my head. For instance, when I am getting ready, I cant stop thinking about how long it is taking me, and how angry everyone will be and what I will tell them and of course how angry I am with myself for letting the people I care deeply about all the time. my kids lives are tremendously effected by this. I cant even count how many times they have missed out on things because I cant get them there anywhere in the vecinity of when they were supposed to have been there. I am takeng an antidepressant and meds for treatment with ADHD. It seamed as if it were going to help for a very brief time when I first began taking them however shortly after I was right back to the old late me!! I think the reason was because I had convinced myself that I I was treated for my problems that was going to fix everything and so I made myself believe that. When, although it may have helped in other areas, it simply did not help to prevent my tardiness!! I dont know what else to do. I have spent years researching and trying to find a way to eliminate this terrible habit from my life but I feel like its hopeless, I cant seem to fix it and cant find anyone to fix it for me!

I hear your pain, Kimmy. Try making a game or contest of getting ready. Pick out a reward for yourself if you can successfully do it quickly. I found my problem is that I'm always fitting four into three. I plan too much in the short time I have. The trick is to not plan so much and make getting ready the only thing you work on. Bet you started to get fidgety the moment I said that. Haha! It's a pain, but we can control this. Keep working at it.

You hit the nail on the head with this one. I took an ADD test once and I don't recall tardiness ever coming up. But indeed tardiness is something that I struggle with on a daily basis. The biggest cause of it for me (even more than the boredom at the other end) is underestimating how long things will take. If I overestimate I risk being bored at the other end. So I underestimate. The results are plain to see.

That is so difficult. I'm constantly underestimating how long things will take. I've found the only solution is to not plan on doing anything other than getting ready and getting to my event on time. It's so boring. My mind just wants/needs to multi-task, but then I'll be late. And embarrassed. And even fired. The other thing that helped me was my Boredom Survival Kit, filled with everything I might need to fight off boredom. As long as I had that with me, I worried about being bored less and less and was more and more on time. Good luck!