5 ADHD Reasons Why I Never Get Anything Done

There is a strong chance that I may not get most of my ToDo list checked off today. In fact, any day of the week that ends with the same three letters is likely to be such a day. Each night, I make a list of ten to fifteen items that absolutely have to get done, then I go to bed. When I wake, I stand as good a chance as the day before to end the current day with relatively few boxes checked. So unproductive. How do I not hate myself? 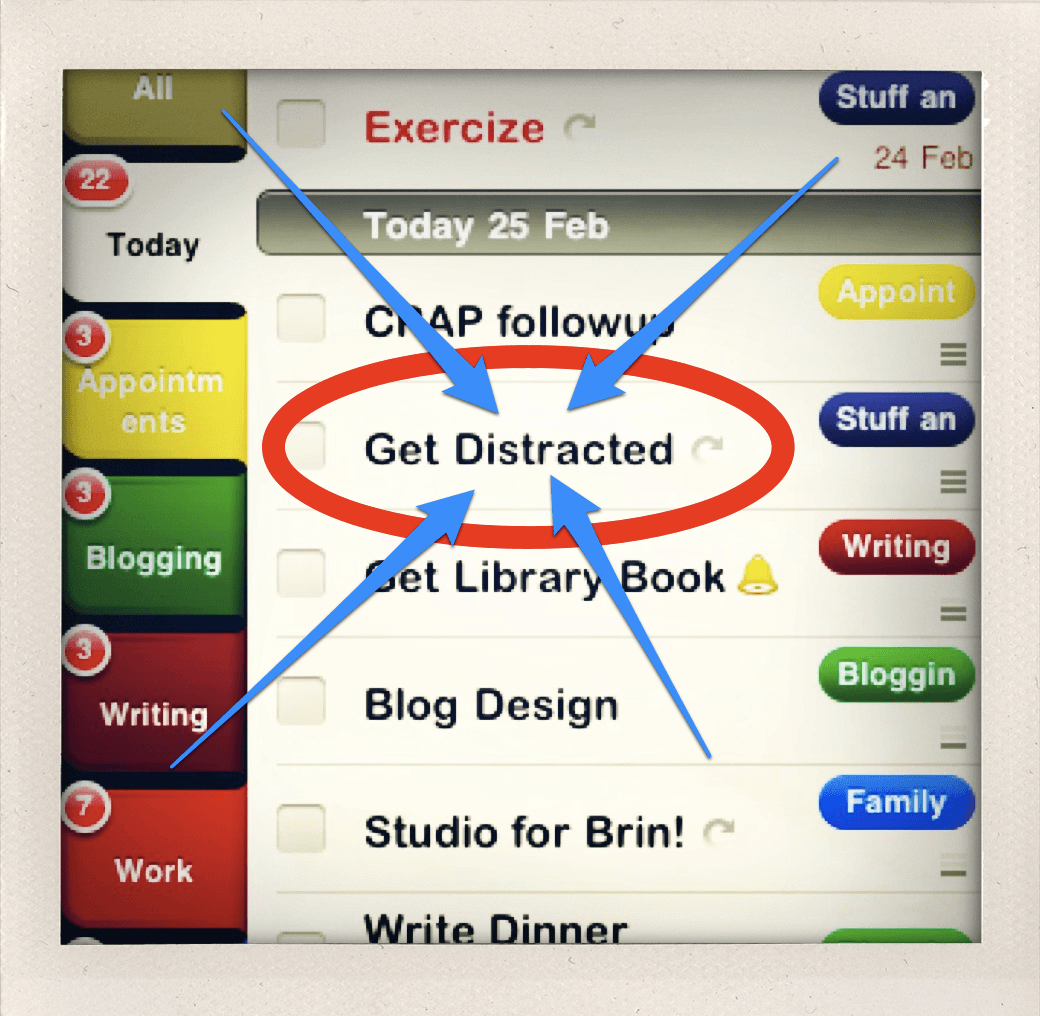 This question came to mind the other day when I was in the thick of a virus and getting frustrated with my unproductivity. There was so much to get done, yet all I seemed able to do was pathetically watch TV and say stimulating words like "oohg" and "blaaaaah". As I read off my aggressive list of ToDos to my wife, I commented that I had accomplished so little on the list that it was a list of ToDidn'ts, not ToDos. She laughed and said she had been thinking along the same lines.

Although I was discouraged, I didn't settle into a brooding self-loathing mindset as I used to do years ago. I had learned instead that the ToDo list was merely a guide. I couldn't take it too literally. There were several reasons for this.

1) I was notoriously bad at prioritizing all my tasks. The night before was filled with the panicky items that seemed so important, but that weren't truly important as the next day progressed.

2) Even though I tried to keep the list short, I had a tendency to pile things on there that weren't easy to check off. Learn Japanese, Solve World Hunger, etc. Eventually, I began to laugh at the aggressive items I added to my ToDo lists, and then I left them off.

3) I never accounted for the colossal amount of distraction time I would face the next day. Distraction and ADHD are like long lost lovers who cling to each other desperately and never let each other out of sight.

4) Nothing ever goes as planned, so why stress over it? All does not hit the fan just because I have ADHD. Sometimes life provides its own obstacles.

5) I never seemed to put on the ToDo list the things that I would actually spend my time doing. Things like drive the kids to dance, go shopping, pay a bill, spend hours on hold with customer service, stop the girls from trying to kill each other, etc.

Perhaps I should place a big old "Get Distracted" up at the top of the list. That way I would at least be guaranteed to check something off at the end of the day. In fact, I think I will do that and report back to you how it felt. In the meantime, I continue to finish as much as I can before it is time to retire. As long as I focus on the important tasks and stay mindful of my list, I'm bound to be productive despite my best efforts to the contrary.

APA Reference
Cootey, D. (2010, February 25). 5 ADHD Reasons Why I Never Get Anything Done, HealthyPlace. Retrieved on 2022, June 30 from https://www.healthyplace.com/blogs/adultadhd/2010/02/5-adhd-reasons-why-i-never-get-anything-done

I'm a big list guy too.
I hate them, but I always seem to be writing them.
I have lists for weekdays, lits for weekends, lists of high priority things, lists of lower priority things, etc.
Soon I'll need a list to keep track of my lists.
After a while I usually end up loosing them anyway, then I have to start new ones.
Here's one thing I do that helps keep me keep a little bit more positive.
As the day is progressing and I'm not getting anything done on my list, I add things that I have been able to do, and cross them off.
It helps you realize where your time has been spent.
From "I didn't get anything done" to "I got a lot of little things done"

@Trevor I’ve heard others use that technique. It’s what inspired my “Get Distracted” idea. Haha! Sounds like you break it down more positively. Good on you. Thanks for commenting.

I'm 41 and am only discovering that I have adult ADD, and you all make PERFECT SENSE to me! I thought I was an idiot because of all the lists I had to make,...some of which start with,... 1. Get dressed. 2. Remove negative thoughts and forgive myself. 3. Clean kitchen....etc.
Thanks guys, so nice to know I'm not crazy.

Considering that I am busy working and am still in my bathrobe at this very moment, I can hardly judge you for having “Get dressed” at the top of your list. Some of this stuff isn’t so obvious when our minds are engaged elsewhere.

Love it...world hunger, learn Japanese! We have the best of intentions though, don't we? I used to call my New Year's Resolutions "My List of Unachievable Goals" because they were always so vague and unrealistic. I have since learned the art of good goal setting, 1) Be specific, 2) Be positive, 3) Set realistic deadlines, 4) Reassess and be flexible. The same goes with to-do lists because they are really just mini-goals, daily goals. The number one thing that keeps me from getting anything done is not planning my day ahead of time. Structuring my day ahead of time really makes the difference. I'm not lazy, just totally and completely distractible!

All great points, Jen. Thanks for contributing. Be specific and be positive are two excellent tips. Be flexible is also notable.

Douglas, you are so funny dude. I read your blog to remind me I'm not crazy or so unique in this world. Keep it up.

Thanks, Brendan. If you can’t laugh at yourself then crazy is where you end up, right? Thanks for commenting.

Hello! I'm new to your blog, but not to living with ADHD. I love the idea of putting "get distracted" at the top of your to-do list! What a confidence booster! I'd love to hear how it works if you do it!
Question: Do you have to cross it off the FIRST time you get distracted?? I know that, for me, it's bound to happen more than once a day!

I found that checking it off first hasn’t worked out after the joke wore thin. So I’ve moved it to the bottom of the list. By the end of the day I look over all the things I haven’t done and lo and behold I can check one of them off! Get Distracted? You betcha. :)

I love the idea of writing "get distracted" at the top of your list. It made me laugh outloud. I think I'll add "have a panic attack" and "sit and worry" to my list. I seem to be really good at getting these things done. Maybe if I just accept and expect to do these items, I'll actually get to some other things that are on my list.

That’s the spirit! Those are great ideas. Hopefully, it will brighten your outlook. I’ve even found that seeing “Get Distracted” on my checklist makes me want to avoid doing it. LOL

ADHD Adults: Ways to Talk to Yourself but Not Be Committed
Adult ADHD
SpongeBob SquarePants Makes Kiddies ADHD?
Adult ADHD
How to Work with Your ADHD to Complete Your Projects
Adult ADHD
ADHD and Low Self-Esteem: Being Criticized and Believing It
Adult ADHD
Adult ADHD and Inaccurate Self-Observation: No One Likes Me
Adult ADHD
ADHD: The Hyper-Focused or Zoning Out Coin Flip
Adult ADHD