There I was in the bathroom, innocently blowing my nose and bopping to music on my iPhone at 12:30am. I had many things left on my ToDo list that needed doing, and with the quiet a sleeping home brings, I could finally focus. I flushed the tissue away and began to wash my hands, deep in thought about all those undone things. That's when I heard a splashing noise. 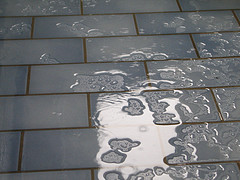 For the briefest second, I stared at the sink and wondered why the running water on my hands sounded so strange. In the next second, I whipped around and verified what my mind told me in a lightning burst:
The toilet was overflowing!

Another half second was spent realizing that the plunger was upstairs, but a scrubber was to the left. Without hesitation I grabbed it and while standing on one foot, I created an ad hoc suction effect by pumping the scrubber up and down frantically. I hadn't seen a toilet overflow this badly in years. There was at least a half inch of water covering the floor, but the disaster had been averted.

What the heck happened? I had only used three tissues. But another thought occurred to me. Why couldn't I respond this rapidly and effectively on everything else? Why hadn't my ADHD gotten in the way?

This incident reminded me of a time in college when a phenomenally bright roommate, who could speak fluent Mandarin Chinese, burst a pipe. He had plugged up the kitchen sink somehow and had grabbed a coat hanger and rammed it down the drain to clear the blockage—straight through the u-bend. He stood there dumbfounded as water spilled all over his feet. I leapt off the couch, flew through the air, dove for a pot, and saved the day. I could barely speak English without getting my foot hopelessly tangled with my tongue. How could I have out-thought such a bright guy‽

Perhaps I have simply missed my calling in life to be a plumber. Or maybe I have just rediscovered that adrenaline is my friend. Panic, fear, anger, excitement — intense emotions trigger the flood of clarity from adrenaline—sharpening my mind into a shiny blade. But only then.

Put me in a classroom, for example, with a live model to draw with dozens of students around me with skritching pencils, squeaking seats, shuffling feet, and whispering voices and I stand there with my mind as blank as my canvas. I remember those days all too well; my instructors thought I was an idiot. If only the model had overflowed a sink or pulled a palette knife on me. Now then they would have seen me spring into action.

All is not so bad, though. Adult ADHD may be a burdensome annoyance, but it also comes with a joyful side full of creativity, humor, light, and the occasional saved day. As I write here for HealthyPlace.com, I'll be exploring the upsides and the humor of Adult ADHD. There are a lot of stupid mistakes to be sure, but there are also the quirky moments of inspiration that need to be celebrated. I invite you to come along and celebrate with me.

Sara~ It was perfect. Thanks for releasing it under the creative commons.

Hi!
Nice to see that my picture came to good use!
regards
Sara/Tintillanta

Aimee ~ Very similar to my wife. She closes her eyes and hopes for the best. I believe that can be trained out of you. Have friends and loved ones start tossing things at you unexpectedly at all hours of the day, like Kato for Inspector Clouseau. ;) I know I used to flinch quite a bit in years past but I’ve had so much thrown at me I’m an old battle axe now. Arrrr.
Did you ever leave comments over at A Splintered Mind? What name did you use? Or were you a lurker? I’m looking forward to working with you here. But if you need a plumber call Roto Rooter!
Semi-Organized Mom ~ You are very kind except for that Band-Aids bit. I’m not a bad luck shield! But you may want to have me around in your kitchen. I have a superpower. I can step in invisible puddles of water. The kitchen will be full of people, but I’ll step in the water. My socks need constant moistening apparently.
Claire ~ Thanks for the kind words. Hope to see your comments here. I always love to read those.

So excited to see your new home. I love your writing, and am looking forward to seeing more of it!

Remind me to be near you when something bad ever happens. You know, like when I'm shopping for Band-Aids and someone decides to hold up the pharmacy...that sort of thing.
As for your new gig. Well done! I love your writing. You never fail to make me laugh or think a bit more deeply. Can't wait to read more!

Good to see you on here! I love reading your funny stories. I am a splintered mind fan as well. Adrenaline doesn't seem anywhere to be found when I actually need it, only when everything is perfectly fine lol. I am the kind of person that completely shuts down in fast acting situations. Instead of reacting, I brace for impact! I am sure to die a young death.
If I'm ever in need of a good plumber I'll be sure to look you up ;)