A genomewide scan for attention-deficit/hyperactivity disorder in an extended sample: suggestive linkage on 17p11

As part of an ongoing study of the genetic etiology of ADHD, we have performed a genomewide linkage scan in 204 nuclear families comprising 853 individuals and 270 affected sibling pairs (ASPs). Previously, we reported genomewide linkage analysis of a "first wave" of these families composed of 126 ASPs. A follow-up investigation of one region on 16p yielded significant linkage in an extended sample.

The current study extends the original sample of 126 ASPs to 270 ASPs and provides linkage analyses of the entire sample, using polymorphic microsatellite markers that define an approximately 10-cM map across the genome. Maximum LOD score (MLS) analysis identified suggestive linkage for 17p11 (MLS=2.98) and four nominal regions with MLS values >1.0, including 5p13, 6q14, 11q25, and 20q13. These data, taken together with the fine mapping on 16p13, suggest two regions as highly likely to harbor risk genes for ADHD: 16p13 and 17p11. Interestingly, both regions, as well as 5p13, have been highlighted in genomewide scans for autism. 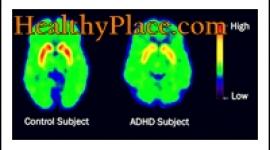