Essay on parenting a special needs child and demands made on a parent of a child with ADHD.

I don't know what the official statistics are, but if my experiences and my email are any indication, I would have to say that most families dealing with an ADHD child often find themselves in a constant state of chaos. Chaos eventually turns into crisis and in most circumstances, not all.... mothers find themselves raising their children alone. The stress and daily tension become unbearable and the family unit breaks apart leaving one parent to do it all. This is hard for any parent in this situation, let alone the parent who is alone and has a special needs child.

The role of Mother... (or father) comes to us instinctively . We know that we need to care for our children. Support them, nurture them and provide for them the basics of life. It's our job to teach them morals, know right from wrong, etc. I think that motherhood/fatherhood is pretty much what you've been preparing your whole life for. Your parents were role models, hopefully good ones, and many of the shows you watched on television provided role models for those of us who watched them.

The role of Warrior does not always come instinctively. Sometimes it has to be learned or you have to be pushed into becoming an advocate for your child by the ignorance and/or wrong-doings of others. Being a warrior is not an easy job. To be an effective advocate for your ADHD child, you have to know your rights, your child's rights and the responsibilities of the person/persons/organization you are dealing with. You will find closed doors and people who will not listen to you. You are often labeled a troublemaker. According to a worker at Child Protective Services, schools often view parents who aggressively advocate for their children as "combative". You might even end up with a "reputation". But, in the big scheme of things, are we out to make friends and be liked by all or is our goal to simply insure that our child receives all that he is entitled so that he/she can grow into a successful adult, to support themselves and possibly a family and seek the American dream?

Which brings me to Chief. I don't believe there are any choices in becoming a chief. It is something that is thrust upon you. As the single parent of a special needs child, and considering the dynamics having such a family brings into the home, my life is spent bouncing between, mother, warrior and Indian chief. Chief of your domain, your responsibility to take care of everyone and everything. Literally.

Having Chiefdom thrust upon you means sacrifices...sacrifices you make because you love your children and they come first in your life. These sacrifices can be small things like giving up a trip to the hottest movie of the year because your child is having a particularly hard day, but sometimes, they are more life altering sacrifices such as giving up an important relationship because of friction between your significant other and your adhd child, or quitting a good job because the boss frowns upon all the calls you get from the school or the time off you need to take because of your child. Sometimes, the biggest sacrifice of all is putting your life on hold until you get your child to a point in his/her life where they can do things on their own and be successful and thrive.

Being Chief isn't easy and not a job I would wish on anyone. It would be nice if we all had a co-chief or a vice-chief, but the facts are many of us don't.

next: A Mother Knows What She Has
~ adhd library articles
~ all add/adhd articles 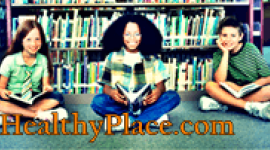 When someone has difficulty coping with a stressor and meets criteria outlined in The Diagnostic and Statistical Manual of Mental Disorders, Fifth Edition (DSM-5), he/she can be diagnosed with…