In 1998, my book Wild Child - A Mother, A Son and ADHD was published. Since 1995, I've been writing a hardcopy newsletter and this year have gone online with The ADD/ADHD Gazette.

I've been an advocate for families affected by Attention Deficit Hyperactivity Disorder (ADHD) since 1995, when my own son was diagnosed. I founded the Yorkshire (UK) support group. I manned the telephone helpline for two years, speaking with literally hundreds of desperate families, offering up emotional support, giving practical advice on education issues, state benefits, management strategies, etc.

Because of my campaigning, two ADHD clinics have been set up in my area, where before there were none. I also did a large mailing to hundreds of schools, raising awareness of ADD and ADHD.

Oh! You want to know a bit more about me? Okay, here goes:

"George Miller, a blond, angelic looking boy, stomps loudly down the stairs and crashes in. It's 6 a.m. and he has that look in his eyes again. The glassy, red-eyed look that his mum, Gail knows so well. Dashing into the kitchen, he pulls cereal, bread, tins, and anything else he can get his hands on out of the cupboard, while mum tries in vain to prevent him from trashing the kitchen. Having failed to find anything that he fancies for breakfast, he throws himself onto the floor in a fit of rage. With thrashing limbs & a spine-tingling wail, he bangs his head against the door frame in temper while Gail tries her best to calm him."

"While Gail prepares breakfast, George tips all the toys from his sister's toy box out onto the floor. Spider men, trains and blocks fly everywhere. "Where is it?" he screams maniacally, banging his fist on floor. He doesn't clear any of the toys away, but dashes to the couch, pulling off the cushions. When mum enters the room, he is teeter-tottering on the cushions, laughing hysterically & uncontrollably. This room, like the kitchen, looks like it has been hit by a tornado. It is now only 6.20 am. Gail sighs and braces herself for the exhausting day ahead. By bedtime her head will be pounding, her chest will be tight with stress, her throat will be hoarse and she will be mentally, not to mention physically, exhausted."

That "Gail" is Me

The woman outlined is me and the boy is my son, George. He was diagnosed with ADHD just before his ninth birthday. I first knew that there was something different about him when he was a year old. He wouldn't sleep, would cry for hours on end, but wouldn't be comforted. As soon as he could walk, he became hyperactive and accident prone. I voiced concerns to the health visitor as he had started having violent tantrums. He didn't play properly and was very destructive. His attention span was poor and just the physical strain of looking after him was exhausting. Things got worse when he got to school. George stuck out like a sore thumb. He couldn't sit still and was often to be found wandering around the classroom for no reason. Teachers found it hard to look after him as he couldn't stay on task long enough to learn and he often disrupted the class. It was as if there was one rule for him and one for others.

Things got worse and we saw a string of heath-care professionals over the years, who couldn't (or wouldn't) help us. George would butt into conversations, throw the most almighty tantrums and he would engage in thrill seeking behavior. One of his favorites was zipping himself up in a sleeping bag and throwing himself downstairs repeatedly. He also had strange ritualistic behaviors; hiding his underwear, repeatedly take his duvet out of it's cover, (so every morning I would have to stuff the thing back in) and he would sleep with his pajamas over his daytime clothes. All this was extremely worrying for us. George had the dubious honor bestowed upon him by one teacher of being "the worst pupil I've ever had the misfortune to teach in the whole of my career." This was so frustrating for me.

How could my child have turned out like this?

In 1995, when George was eight, things had sunk to an all time low. I was on the edge of a nervous breakdown as his aggressiveness and violence were escalating and apart from his symptoms, he now had the added pressure of having no friends and teachers who didn't like him. He was constantly frustrated because although he was a bright lad, he just didn't know what he was supposed to be doing in class. This was down to his frequent lapses in concentration and his difficulty staying seated. He would argue and quibble with everyone and when he got frustrated, he would go and bang his head against a wall in temper.

Later on that year, I heard about Attention Deficit Hyperactivity Disorder (ADHD) and after some research I realized that this was what was afflicting George. I contacted the National Support Group, here in Great Britain, which gave me the name of a specialist who did indeed diagnose George with the condition. Shortly afterwards, George was also awarded a Statement of Special Needs which meant he would get one-on-one assistance in class.

You are not alone

By the time I founded the West Yorkshire ADHD Support Group, I had already done a lot of research and one thing I learned was that Attention Deficit Hyperactivity Disorder affects up to 20% of our schoolage children to some extent. Realizing that there must be many thousands of families out there suffering just as we had done, I told my story to the local press and the phones went mad. Suddenly, I found myself speaking to hundreds of desperate parents whose families had been blown apart by ADHD. Marriages had broken up because of it, children were being threatened with exclusion from school. Many were already excluded.

Often, mothers cried sharing their stories of how psychiatrists accused them of having poor parenting skills...the same psychiatrists who they had gone to for help. I certainly understood how they felt on this one. It had happened to us on occasion.

Since this time, I have worked hard to raise awareness among parents and professionals about ADHD and it's impact. The mass of paperwork I accumulated throughout the years prompted me to write a book entitled "WILD CHILD!" (A Mother, A Son and ADHD) which chronicles our ten year struggle to get recognition and treatment for George's condition.

George is now twelve, and has recently had a further diagnosis of Asperger syndrome (high functioning autism) and his behavior is still extreme, so we use a variety of techniques to manage him. Unfortunately they don't always work; the understanding is just not there. He has no learning difficulties, but his social skills are still severely lacking. There is no cure for these conditions; they can only be managed. Sometimes ADHD symptoms subside with age, but often they remain into adulthood.

next: 50 Tips on the Classroom Management of ADD
~ back to Wild Child homepage
~ adhd library articles
~ all add/adhd articles

APA Reference
Staff, H. (2007, June 6). My Story: Everyone's Got One, HealthyPlace. Retrieved on 2022, November 26 from https://www.healthyplace.com/adhd/articles/gail-miller-my-story 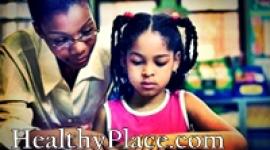 Siblings of Children with Special Needs