“Nothing tastes as good as skinny feels.”

When supermodel Kate Moss told the fashion magazine WWD Beauty Biz that this seven-word statement was one of her mottos, the resultant publicity introduced many people to the controversial concept of thinspiration. A portmanteau of the words thin and inspiration, thinspiration (or its shortened version, thinspo) refers to the use of photographs and quotes as a means of encouraging people to lose dangerous amounts of weight. (The Alluring Lies of Pro-Anorexia)

Though the pursuit of unhealthy weight loss existed long before the advent of the Internet, the rise of social media in recent years has exponentially increased the number of people who have been exposed to thinspo-related content. Unsurprisingly, the result has been far from beneficial.

Have You Met Ana? 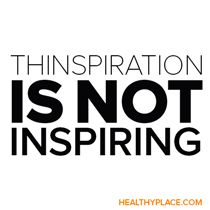 Thinspiration is one component of a larger online movement that is devoted to promoting dangerous weight restriction techniques and other unhealthy behaviors. Known as pro-ana (which is short for pro-anorexia) and pro-mia (short for pro-bulimia), this effort is driven by websites and social media accounts that feature photos of severely underweight individuals and allow users to share and learn techniques for limiting food intake, purging, hiding their actions from family and friends, and otherwise engaging in disordered behaviors. In some cases, Ana and Mia are referred to as people who are giving the advice or described as friends of those who are engaging in the disordered eating behaviors.

Though it is not always easy to determine the identity of the individuals who are creating and managing these sites, it appears that most are run by people who either have been diagnosed with an eating disorder or are demonstrating symptoms that would be consistent with such a diagnosis (Warning Signs of an Eating Disorder). Reflecting the reality that eating disorders are most common among teen girls and young women, most pro-ana and pro-mia accounts on Instagram, Twitter, Facebook, Tumblr, and other popular social media sites seem to have been designed by and for members of these demographic groups. However, sites by and for teen boys and older adults (both males and females) do exist.

The growth of the Internet has facilitated an ability to connect with people and ideas (both positive and negative) that was virtually inconceivable as recently as a few decades ago. And the recent focus on adapting the Internet for mobile devices, such as smartphones and tablets, has made it possible to keep in contact with these people and ideas anywhere one can find a cell phone signal or a wi-fi connection. Thus, a struggling teen can be bombarded by negative pro-ana messages within the supposed security of his family’s living room, a college student can access thinspo messages while in line at the school cafeteria, and a young woman who is slowly starving herself to death can get hundreds of congratulatory messages without leaving her apartment when she posts the latest picture of her emaciated body to her Instagram account.

Fighting Back Against Thinspo

The effort to counteract the dangerous impact of thinspo-related social media accounts has taken many forms, including calls to close down offending accounts, attempts to re-direct users to more productive conversations, and efforts to learn from what is being posted and shared. For example, the National Eating Disorders Association (NEDA) has launched a Tumblr account called “Feeding Hope” and a website called “Proud2BMe,” both of which encourage the dissemination of body-positive messages throughout a variety of social media spaces. Researchers with the University of Washington and Seattle Children’s Hospital have studied whether problematic behaviors and individuals in crisis can be identified by monitoring pro-ana and pro-mia social media accounts.

As is the case with virtually all aspects of eating disorders, the problem of thinspiration and social media is a complex challenge that resists simple solutions. Yet in a manner that is also reminiscent of the fight against the diseases themselves, many talented and dedicated individuals are continuing the effort to eradicate the threat, minimize the danger, and protect those who are most vulnerable.