While society may be quick to apply the term “mental illness” to a broad spectrum of behaviors, it is slow to acknowledge the idea that sanity itself is an elusive entity, difficult if not impossible to define, and largely reliant on context.

The same cannot be said for behavior designated as inappropriate, which is to say, demonstrating some form of mental illness. Behavior considered the height of fashion in Cheboygan, (assuming there is fashion in Cheboygan) might be considered bizarre, disturbing, and unwholesome in Chad, Bongo Bongo, and Ulm. 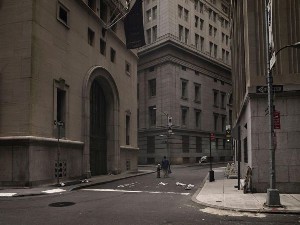 At a recent press conference, AAAAA spokesman Quentin Auchtermuchty shocked attendees with this conclusion taken from the executive summary of his recent study enigmatically entitled, “Our Recent Study.”

“The contextual relativism of sanity, qua sanity, poses difficulties for today's care giver, further complicated by global erosion of character, mores, manners, and social conventions which, when taken collectively, might be referred to as “politesse.” Take narcissism as an example. Long held in contempt by nice people everywhere, narcissism has moved front and center into mainstream culture as anyone who watched the Oscars can attest.

“Only recently classified as illnesses, these disorders are now relatively . . . squirrel. Non-stop communication has reduced us to a short attention span society where every single form of digital chatter has been dumbed down to nuggets of 3-seconds or . . . so what? Got a problem with that?

“Bipolar disorder has been cited as the cause of so much mischief by prominent figures that it’s been downgraded from illness to a way of being colorful.

“Shifts in cultural standards may mean a decrease in sales for pharmaceutical companies, and fewer billable hours for healthcare workers, but, on the positive side, they do acknowledge the link between mental illnesses and a society that is increasingly whackadoomian.

AWA Classifies Ice Fishing As A Form Of Mental Illness
Drinking On St. Patrick’s Day, Green Around the Gills
Evie.bipolar1
April, 1 2016 at 7:52 pm

I absolutely cannot stand it when I'm told that I'm not really bipolar or its not a real illness, because "everyone's a little bipolar." It makes me feel like I should just be normal, but since that's impossible, I'll stay broken and malfunctioning forever like a recalled toy. I hope awareness of the actuality of mental disorders and diseases can help that.

I think it would be a terrific title! ;)

Hi!I feel like the stranded boat at times! I just can't get the boat to understand that I'm purposely trying to navigate my way to greater Wackadoomia. I believe that the population will embrace the prospect of a boring bipolar, rather than a colorful one. After all, what would the world be like if every bipolar was colorful;it would become ho-hum very quickly. Anyways, I'll just keep on sailing to Wackadoomia. Have a terrific weekend. :)

Hi Cindy: You may have given me the title of my next book - Sailing to Whackadoomia - what do you think?