I've written a bit this week about the link between ADHD and low self-esteem. I've discussed how I gave up fantasy illustration due to rejection letters and how I let the Boss from Hell™ yell at me without standing up for myself. My 20s were filled with painful, scarring memories. But did you know that some of those memories ended up being funny? 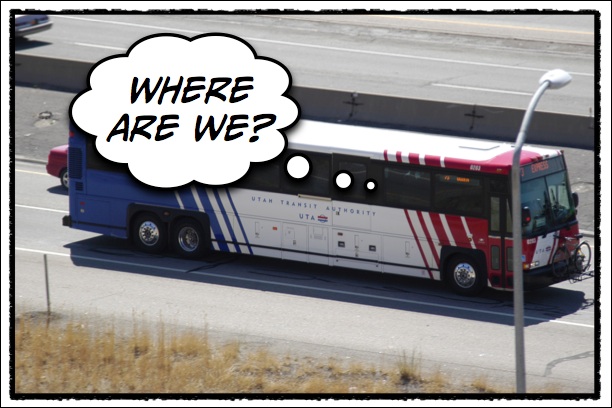 When they say time heal all wounds, I never really believed them. Most of my wounds were self-inflicted and I was never going to forgive myself for them. That was then. Since the day I started to laugh at my mistakes instead of beating myself up about them, however, I turned a road in self-esteem for the better.

One particular memory that used to fill me with hot embarrassment involved a bus. I was a freelance artist around 1993/94 for a company that converted old 4-bit games to 8-bit games for the PC—basically taking 16 color graphics and repainting them as 256 color graphics. It wasn't a bad gig and I enjoyed the work.

After a few months, new management came in and decreed that all freelance artists must work in-house. I had no car, and so had to rely on the bus system to get me there. But I was very nervous. My last job hadn't worked out so well for me. Still, all the nervousness in the world is powerless against distraction. Something entertained me long enough that I missed the bus. I was so embarrassed I called and told them I wouldn't be coming in that day. There's that low self-esteem again.

The next day I was determined not to repeat the same mistake. My bag was ready. I had everything I needed. The time came, and I became distracted again. But only for a few minutes! Fortunately, there was still time to catch the bus if I ran.

Around fences and over curbs and through parking lots I ran like a rocket. The bus was just pulling up as I arrived. I made it! I settled in to read a book, confident that I had thwarted ADHD. After a while I came out of my reverie and noticed the time. We weren't anywhere near my work and I was going to be late! Where were we? A quick chat with the bus driver revealed that I had jumped on the wrong bus.

I don't know. Those big, old bus numbers are hard to miss, yet somehow I was so distracted by being late that I didn't pay attention. Very classic ADHD. I sat there on that bus red to my ears. If I recall correctly, I rode the bus all the way back around to where it picked me up. I didn't own a cellphone in those days, and I didn't know anybody with a car. I couldn't call work. I couldn't get help. When I got home I decided that I couldn't rely on my ability to catch a bus, so I called work and quit.

It's a sad ending. 'Tis true, but what a stupid, goofy thing to do. I think of the 25 year old me on a bus heading off in the wrong direction now and I giggle. That must have been some book to prevent me from noticing I was heading west instead of north.

What a different experience it could have been if I was willing to laugh at my dumb mistake instead of hating myself for it. I probably would have got off at the next stop and used a pay phone to call work. I would have made a joke about there being a reason I liked working out of my home. I would have kept my job.

It's hard to second guess learning experiences, though. Would I be who I am now if I hadn't messed up with such flair? At the very least, I have funny stories to share with my kids. Our adult ADHD lives may be filled with gaffes and disasters, but hating ourselves won't make the mistakes go away. Better to laugh at them. We'll live longer and maybe entertain friends and family to boot.

ADHD and Low Self-Esteem: Being Criticized and Believing It
Adult ADHD - 3 Ways to Fight Killer Boredom
elham
February, 9 2010 at 4:59 pm

where can i get this book by Hallowell & Ratey ......I need it badly
Elham

You can find the book for sale here (http://3.ly/uCVz) on amazon.com. One guy’s selling it used for a penny at the moment. Not sure what the shipping would be… You could also check your local bookstores. Good luck!

@charlene Oh, it’s ok to laugh. I do now. It *is* rather funny.
Good luck with your son’s assessment. Please keep in mind that ADHD has many elements in common, but that individuals all manifest ADHD in unique ways, which has contributed to it’s long difficulty in being taken seriously as a disorder. I would recommend reading any book by Hallowell & Ratey, but you may find Answers to Distraction the best. I’m sure your library has it.
~Douglas

Thanks for this article. It was a little sad and a little funny. My son is going to be assessed for possible ADHD soon so this was an interesting POV for me to see.