The Soul of a Scientist

A short essay on how teachers inform students of Einstein's genius, but very few are offer glimpses into the soul of this scientist.

When Heart and Mind Unite

Recently my daughter and I were discussing the life of Albert Einstein. When I asked her what she had learned about him in school over the years, she responded in her usual fashion when queried about academic subjects, "not much," she said, bored already. I pressed her for details, and eventually discovered that the extent of her knowledge was that he'd been a famous scientist. As we proceeded to review some basic facts about this world-renowned physicist, that he'd developed the theory of relativity, made significant contributions to the field of quantum physics, and had been instrumental in the development of the atom bomb, it occurred to me that although teachers inform students of Einstein's genius, very few are offer glimpses into the soul of this scientist.


Einstein spent a significant portion of his adult life advocating for the cessation of social injustice and war. His role during World War I in establishing a nonpartisan coalition that worked to promote peace and which advocated for a supranational organization to prevent future wars was only one of his many roles as a political activist.

He spoke and wrote to audiences around the world calling for peace, nuclear disarmament, and social justice, insisting that the citizens of the world address difficult but vital issues and questions including, "Here, then, is the problem we present to you, stark and dreadful and inescapable: Should we put an end to the human race, or shall mankind renounce war?"

He appealed to the social and moral conscience of scientists cautioning, "the concern for man himself must always constitute the chief objective of all technological effort...in such a manner as to assure that the results of our scientific thinking may be a blessing to mankind, and not a curse."

He pointed out our interconnectedness and interdependence observing, "How strange is the lot of us mortals! Each of us is here for a brief sojourn; for what purpose he knows not, though he sometimes thinks he senses it. But without deeper reflection one knows from daily life that one exists for other people -- first of all for those upon whose smiles and well-being our own happiness is wholly dependent, and then for the many, unknown to us, to whose destinies we are bound by the ties of sympathy. A hundred times every day I remind myself that my inner and outer life are based on the labors of other men, living and dead, and that I must exert myself in order to give in the same measure as I have received and am still receiving... "

He also reminded those of us who long for a better world that it is absolutely essential that we too play a role in its creation. "Whatever there is of God and goodness in the universe, it must work itself out and express itself through us. We cannot stand aside and let God do it."

While I'm hoping that some day my daughter achieves an elementary understanding of the scientific contributions Einstein made to our world, today, on the first year anniversary of the world trade center attack, what is of far greater importance to me is that one day she'll comprehend how and why he fought so hard to save it.

Note: The Einstein quotes in this article were collected from the following website: http://www.aip.org/history/einstein/

APA Reference
Staff, H. (2008, October 31). The Soul of a Scientist, HealthyPlace. Retrieved on 2023, February 7 from https://www.healthyplace.com/alternative-mental-health/sageplace/the-soul-of-a-scientist

A Message From Chief Seattle 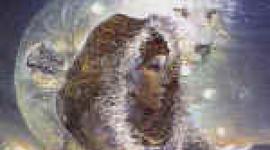 The Incorporation of Holistic Treatment into a Brief Treatment Framework

Please Give Me Patience