Libby Gill, author of Traveling Hopefully, writes about the emotional impact of death, divorce, alcoholism, and suicide on her family.

Thomas Wolfe is the guy who said you can't go home again. Now, he didn't check with me first, but if he had, I would've set him straight. Because once in a while, you do get a chance to go back home. I know. I just went home, back to my old hometown of Jacksonville, Florida to reconnect with my roots.

Ironically, what drove me out Jacksonville in the first place turned out to be the very thing that pulled me back. And that's my family. This past Christmas marked the first time we'd all been together - my mother, brothers, sisters, nieces and nephews, my two kids and future husband, plus my brother's Russian bride straight from Kiev - in more than twenty years.


Christmas has always been a tough time of year for us. My brother David, the oldest of us six kids, died on Christmas morning after he crashed his friend's VW coming home from a Christmas Eve party. My mother told me just this year that my father had taken David, who was home on break from Princeton, to lunch that day to tell him that Dad was planning on divorcing her. My family never recovered from David's death or from my father leaving us all just a few months later.

When I wrote in my new book, Traveling Hopefully, about how I'd allowed growing up with so much pain and loneliness to hold me back in my life, I was concerned about hurting people's feelings by telling the truth about our family. But I was even more concerned about perpetuating the pain - mine and others - by backing off from that truth. It wasn't until just before my book was out in stores and I was scheduled to appear on the Dr. Phil show that I sent copies to my siblings, inviting their reactions. I was scared. So scared that I wouldn't even give a copy to my mother who'd come out to celebrate my fiftieth birthday until she was boarding the plane to take her back home to Jacksonville. If she was going to be furious with me, I figured, better she do it at a cruising altitude of thirty-five thousand feet.

But she wasn't furious. She was proud of me. And with unexpected candor, she began to fill in more of the missing textures and undisclosed details of our dark family saga. Courageously, my older sister, younger brother and the stepsister with whom I'd shared an angst-ridden adolescence living in Japan lined up to shade in the rest. All of the pieces of this sad Southern drama - death, divorce, alcoholism, and suicide - began to fall into place. Suddenly, all the stories that had been hushed into the shadows for nearly forty years were brought out into this blaze of eastern sunlight, like the beach towels we used to hang off the balcony to dry so they wouldn't mildew in the humidity after a swim. And just like those towels, our stories began to dry out and lose the moldy stench of pain.

After she read Traveling Hopefully and saw me on TV, my big sister Cecily - who'd become such a stranger we could barely muddle through a holiday phone call - wrote me a heartbreaking email telling me how much she'd liked my book and how sorry she was for the pain I'd suffered. She included a list of numbered points - she was always good at math - detailing her own story of abandonment and loss. I was instantly sorry for all the years that I hadn't reached out to help her or to ask her to help me. At the end of her letter, she told me she'd liked me on Dr. Phil, especially the way I was covering up the gray in my hair with highlights and that she was thinking about doing hers the same way. Miraculously, we were sisters again, forever linked by shared DNA and mutual history.

Though pain and geography had put miles between us, Cecily and I still shared a reverence for the rambling riverfront house, built in 1902, where we'd grown up. As we took a Christmas day drive alongside the St. John's River back in Jacksonville, our old childhood home seemed to call to us like one of the local songbirds that Cecily could identify at a glance, with or without her field glasses. It wasn't just the towering magnolias or the Spanish moss spilling out of the live oak trees like the tangled waist-length curls we'd worn as girls that spoke to us. It was our shared need to stare down the past and come full circle to face the future that led us to the doorstep of our former home, forty years to the day that our oldest brother died.

You might be able to go home again, but you better be prepared for it to have been remodeled a couple of times. At least, that's what Cecily and I discovered when we walked up to the manicured McMansion that had once been our ramshackle country house, prepared to blithely ask the family inside for a tour. But as we peered in through the leaded glass kitchen windows, our courage began to falter. After all, this was Christmas morning. Could we dare disturb the family inside, still sitting at the table in their pj's looking so cozy and happy and so unlike our family ever appeared in my memories?

We could. In fact, we did. And we were rewarded with the grand tour of our ancestral home. Just a few hours later, Cecily and I sat down to my mother's Christmas dinner and shared our adventure with the entire family. As we swapped stories about the old neighborhood and moved on to discuss our roots - both the prematurely gray kind and the deeper ones that bind us together - I knew I was home. So Thomas Wolfe, fellow Southerner, sometimes you can make that homeward journey.

Libby Gill is a life-change coach, lecturer and author of two books, including the newly released Traveling Hopefully: How to Lose Your Family Baggage and Jumpstart Your Life. Libby can be reached online at www.LibbyGill.com .

next: Articles: A Celtic Response to An Inconvenient Truth

For Everything There Is A Season
Gratitude and Wonder
You Can Do It, Can I? 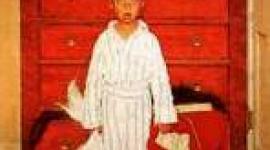 Massage for Treatment of Psychological Disorders

Helping Your Child With Obesity